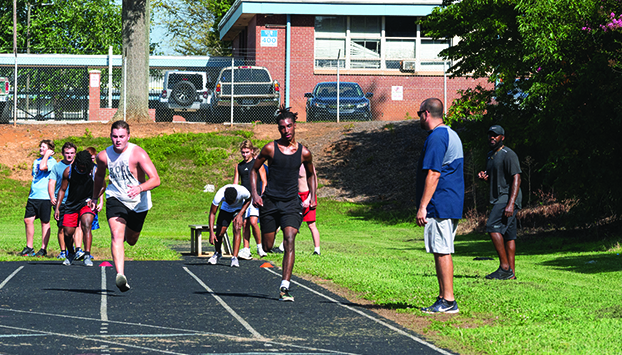 Loeblein’s five TD throws in a 44-0 homecoming wipeout of North Iredell matched a mark B.J. Sherrill set against Concord in 2010. That was a 48-28 victory in the third round of the 3A playoffs. Proving that there is a plan for the universe, the last of those five TD strikes by Sherrill was reeled in by tight end Louis Kraft, the current head coach of the Falcons.

“It was amazing to be part of a record,” Phillippe said. “Noah is a different player this year. He had a few nerves last season, but now he’s very confident. We’re working to get better every day in practice. Noah is making some great throws. Our job is to catch them.”

While Phillippe attends class at West physically on Thursdays and Fridays, on the days when he’s not at school, he works a full shift at the Food Lion Warehouse.

He made the transition from being just another quick guy to being someone who could be counted on to run the right routes and make the difficult catches.

“He had God-given ability that you can’t teach,” Kraft said. “It took some time for him to find consistency, but he became a jayvee playmaker as a sophomore.”

As a junior in the fall of 2019, Phillippe’s contributions to the varsity squad were modest.

The Falcons were a run-heavy team that averaged only 12 passing attempts per game. When they did put it in the air, seniors Jalen Houston, Ty’Kese Warren and Quay Weeks were the most likely targets for Loeblein’s passes.

The breakout for Phillippe came on the final night of the 2019 regular season. West Rowan battled Statesville in a game that would decide the North Piedmont Conference championship. The Greyhounds won it in overtime.

“I remember it very well,” Phillippe said. “I had two good catches. Both of them were third-down catches that gave us first downs.”

Coming through in the most important game of the season and earning the trust of his quarterback and his teammates elevated Phillippe’s confidence level. He knew that if the football season ever arrived in the 2020-21 school year, his role would be go-to receiver.

“But it was very different trying to prepare for this season,” Phillippe said. “We didn’t have the normal workouts to get our timing down. Then Noah was still playing basketball when this football season started.”

The season started with a 36-0 beatdown from Salisbury, but the Falcons have gotten better every week. They’ll go into Friday’s home game with Carson with a 3-0 NPC record. If West wins and Statesville wins at East Rowan, the Falcons and Greyhounds will decide another league title on the final night of the regular season.

Phillippe had five catches for 50 yards against Davie in Week 2. Then he had four for 88 against East Rowan. He had a huge night with a half-dozen catches against South Iredell. Then he enjoyed the first two-TD night of his career against North Iredell.

“He’s been a steady producer, one of the best receivers in the county,” Kraft said. “He had very good guys in front of him last year, but we thought he could be a really good player. I think he’s done more than anyone could have reasonably expected.”

Loeblein already had hit Ben Sweet for touchdowns twice and was scrambling out of the pocket against North Iredell when he spotted Phillippe.

“He threw it up there for me and I was able to go up over their DB and get it,” Phillippe said. “The second TD for me was just a simple take-off route. Noah threw a great ball. I have to give him the credit.”

Phillippe has track speed. He ran 53 flat in the 400 in the 2020 track season that was aborted after just two West meets due to COVID.

He’s not large at 6 feet and about 165 pounds, but he does a good job of blocking in West’s improving running game.

“I think every receiver would rather go out for a pass than block,” Phillippe said with a laugh. “But I am blocking better this season. I’m a lot stronger than I was my junior year. That makes it easier.”

Work, school and football. Phillippe manages to handle a heavier load than is normal for a teenager.

“He’s a selfless guy who’s never cared about the stats, just the wins,” Kraft said. “He’s always been a great teammate. Nothing is better than watching a great teammate become one of your best players.”