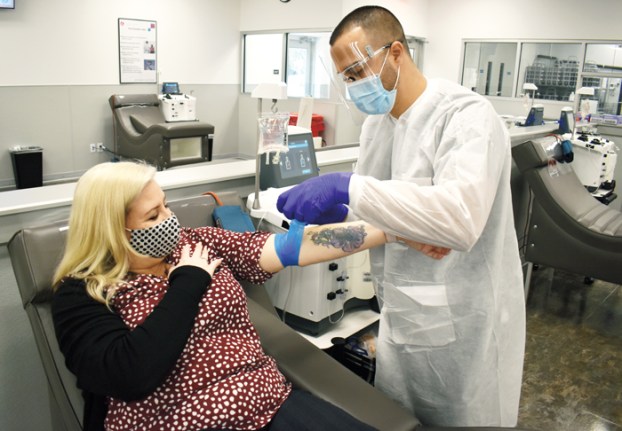 SALISBURY — As part of an expansion into North Carolina, ImmunoTek Bio Centers has opened a plasma collection facility in Salisbury.

The plasma collection center, located in the former Rite Aid building at 640 Jake Alexander Blvd., welcomed donors into its doors for the first time on Tuesday morning.

“ImmunoTek is excited to open a center in the Salisbury area,” said Kino Pearce, director of operations. “ImmunoTek has a pretty good presence in South Carolina, but we’re developing a presence here in North Carolina.”

The Salisbury location is ImmunoTek’s 43rd location nationwide and third in North Carolina, joining existing centers in High Point and Hendersonville. Two more locations will soon open in the Tar Heel State, one in Goldsboro and the other in Rocky Mount.

The company has been expanding rapidly to meet the increased demand for plasma caused by COVID-19. Plasma is the largest component of blood in a person’s body and holds the other components, such as white blood cells, red blood cells and platelets, together. The need for plasma has risen during the pandemic due to a shrinking donor pool and because of plasma’s use in some COVID-19 treatments, primarily in convalescent plasma therapy.

“It’s been interesting for us to take that approach and we’re happy that we’ve been able to work with Mount Sinai,” said Thomas McGee, ImmunoTek’s director of operations for the Salisbury facility. “We still have a full team up there and we’re still going full steam ahead.” 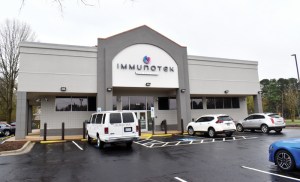 The pandemic initially caused ImmunoTek to temporarily shut down its operations for several weeks. Once the company determined how to operate safely, it reopened with a renewed vigor and with heightened health and safety protocols in place.

In order to give plasma at ImmunoTek, a donor must first register inside the facility and pass a series of medical checks.

“That’s geared toward donor safety and also product quality to make sure the plasma we collect meets the standards we set,” McGee said.

If a donor is deemed eligible, they are seated next to a NexSys PCS collection machine and their blood is drawn using a slightly bigger-than-normal needle. The blood enters a glass centrifuge in the machine where it is rapidly rotated. Since plasma is heavier than red blood cells, it separates from the cells and drops to the bottom of the container. The red blood cells are then injected back into the donor’s bloodstream.

In total, the process only takes about 55 minutes for a first-time donor, McGee said. Once someone has donated once, they are technically deemed a return donor and could revisit the center just days later to donate more plasma.

“Plasma is 90% water, so that allows the donor to donate more frequently because they don’t have the red blood cell loss,” McGee said.

Since it only takes the body between 24-48 hours to regenerate the plasma lost during the donation process, donors can give plasma twice in a seven-day period, McGee said.

The plasma collected by ImmunoTek is typically sold to medication manufacturing companies.

“It’s a wide range of medications, autoimmune diseases, cancer, there are about a 100 or so medications it gets turned into,” McGee said.

Pearce said the top medication the plasma is used to produce is immunoglobulin, which is an intravenous drug that is used to treat people who are severely immunocompromised.

“It’s a collection of antibodies from our donors, essentially,” Pearce said. “It’s primarily used for immune-deficient people. Anecdotally, there used to be a TV movie about a boy in a bubble because he had no immune system. That boy doesn’t have to live in a bubble anymore because of plasma.”

Although donors are paid for their plasma, McGee said they can leave the center knowing they’ve also helped someone else.

“They’re compensated, but they get that compensation on top of being able to know what they’re doing is going to help other people,” McGee said.

The price donors are paid for plasma is based on the local market, McGee said. A donor will currently receive $75 for their first three donations. After that, the rate is $40 for the first donation of the week and $60 for a second weekly donation. There are referral bonuses as well. Payment is put on a prepaid card and is added to the machine once the plasma donation process is finished.

ImmunoTek’s current operating hours are from Tuesday through Saturday from 10 a.m. to 4 p.m. McGee said that the center, which is currently staffed by about 20 employees, hopes to expand its hours to seven days a week.