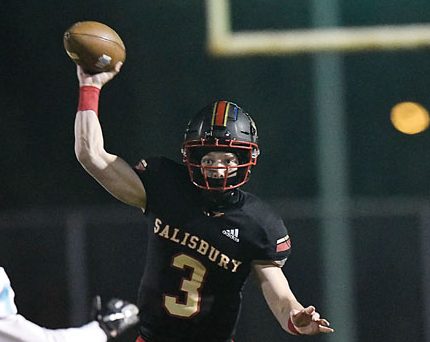 SALISBURY — Complete games are normally a stat for baseball pitchers, but Salisbury’s football team logged one on Thursday.

From start to finish, the Hornets were great at Ludwig Stadium in a 42-6 win against Central Carolina Conference rival Ledford.

Not perfect, because there was a lost fumble and handful of costly penalties, but great, nonetheless.

Salisbury QB Vance Honeycutt ran for four touchdowns and threw one to Jackson Murphy. Tackle-breaking sophomore JyMikaah Wells only got in the end zone one time, but he piled up 150 yards and his steady 5-yard gains kept the ball and the chains moving. Wade Robins kicked the extra points.

“JyMikaah may have only scored once, but he put us in good positions all night,” Salisbury head coach Brian Hinson said. “And he had his best blocking game.”

Christian Franklin, Ledford’s 210-pound running back, is tough. He kept coming. He put the Panthers on the board by returning a third-quarter kickoff for a touchdown.

Ledford (3-3, 2-3)  is stout and fundamentally sound and had been in every game it had played prior to Thursday, but the Panthers never had much of a shot in this one. It was 14-0 after Salisbury’s first two possessions, 21-0 at halftime, and 28-0 before Franklin’s kickoff return.

Even that electric return didn’t turn momentum Ledford’s way. Jalon Walker blocked the PAT, and then the Hornets went right back to work and made it 35-6.

Right tackle Tkaii Gaither was officially crowned at halftime, but it was a night on which all the Salisbury Hornets played like homecoming kings.

“Finally,”  Hinson said with a smile of relief. “We finally executed the way I thought we could on offense. Defensively, we contained some very good players. Ledford came in with tremendous offensive numbers, but they didn’t score against our defense.”

Salisbury still has a regular-season game left against South Rowan, but the Hornets already have played what amounted to playoff games the last two weeks. The Hornets (4-2, 3-2) won at Central Davidson last week in a must-win scenario before they took care of Ledford.

“We approached it as a playoff game and we had our best week of practice in preparation,” Honeycutt said. “We wanted to attack them early, and we did. Even after we got up by three touchdowns, we kept our foot on the gas. Our offensive line played great. Our defense was great again.”

Ledford went into punt formation when it faced fourth-and-8 on its first possession, but never got the punt off after a mishandled snap. Walker made the crushing stop, and the Hornets had the ball at the Ledford 30. It didn’t take long for Honeycutt to get his first TD from the 2.

Next came another Ledford three-and-out, and another Salisbury short-field drive that started in Ledford territory. Wells produced a 25-yard romp, and Honeycutt broke tackles for his second touchdown.

“We all knew the stakes,” Walker said. “We came in with a very strong mindset. We got momentum and kept it.”

Wells, who rushed for 129 yards, carried five straight times to start Salisbury’s third scoring drive, which bridged the first and second quarters. He finished that drive with his TD, and it was 21-0.

Ledford was desperate to score on its next possession and did its best to stay in the game. Owen Finley made a leaping catch for a 17-yard gain and there was a 15-yard face mask penalty against the Hornets that was tacked on after a short gain by Franklin.

Ledford reached the Salisbury 24, first-and-10, but Zae Clay stuffed Franklin on a first-down run. Ledford tried to set up a screen for Franklin on second down, but Jaden Gaither made the hit in the backfield. On third down, Gaither and Nick Hall teamed to sack Ledford’s strong-armed young quarterback Nathan Carr. The Panthers had little choice but to go for it on fourth-and-very long, and three Hornets pursued Carr, who had to run for his life and threw incomplete.

“We kept the pressure on him,” Walker said.

That fourth-down stop with 3:15 left before halftime was Ledford’s last realistic chance to change the flow of the game.

The Panthers couldn’t block the Hornets’ defensive line and couldn’t deal with Wells or Honeycutt. Even when Salisbury plays broke down or Ledford got serious pressure, Honeycutt, a UNC baseball recruit, used his wheels to avoid trouble and to create misery for the Panthers. He had 121 passing yards and 146 rushing yards and broke three runs of 24 or more yards in the second half.

“Sometimes their defense did a lot of things right, but Honeycutt still made a play,” Hinson said. “That’s just being an athlete.”

Ledford had been averaging 300 yards per game with a nicely balanced offense, but the Panthers had 47 yards at halftime against Salisbury and didn’t do significantly better in the second half.

Ledford was inside the Salisbury 5 late in the game, with nothing but pride on the line for both teams, and the Hornets still wouldn’t let the Panthers score.

When the Hornets stopped them, players and fans celebrated as one.

The Hornets played with the sort of tough mentality and execution they demonstrated during the playoff run of 2019 that made them runner-ups in the state.

“This basically was lose and go home,” Walker said. “No one wanted that.”