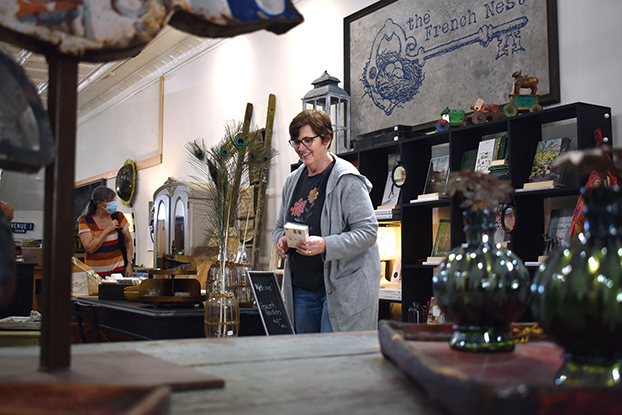 Wendy Alexander-Persse has opened a new vintage shop in downtown Salisbury, which is the fourth business she's owned near the heart of town. Ben Stansell/Salisbury Post

SALISBURY — Seated at a vintage dining table, surrounded by lamps, bookcases and decorations, Wendy Alexander-Persse is at home in her new shop in downtown Salisbury.

Named The French Nest, the vintage decor store is located at 119 S. Main St. and offers everything from furniture to handmade candles and linen aprons.

In addition to being filled with items Alexander-Persse handpicked herself — and she only picks things likes — the store is comfortable to her because it’s where she launched her first foray into Salisbury commerce 11 years ago.

“I love this space and how perfect to be back where I started in 2010,” Alexander-Persse said. “I looked at a couple other spots, but this block is my favorite.”

Called Grayshores Trading, the store may have been the first shop Alexander-Persse opened in Salisbury, but she was already a seasoned small business owner at the time.

A native of New York, Alexander-Persse moved to Salisbury in 1986 and stayed for about seven years before moving down the eastern seaboard to Brunswick, Georgia. There, she owned and operated two shops. After selling the second business, Alexander-Persse worked at a vintage store in Brunswick, where she learned several important tricks of the trade.

“I had worked for a woman my last two years in Brunswick who has the best store I’ve ever been in. I got to work for her for two and a half years,” Alexander-Persse said. “I learned a lot. She was very generous with her suppliers and sharing information.”

When Alexander-Persse moved back to Salisbury to escape the relentless southeastern Georgia heat, she put her business acumen and knowledge of vintage goods to use and opened Grayshores Trading. She launched another venture, called Zinc, near the train station a few years later and then purchased the Literary Bookpost in 2016.

She planned to take a break from being a small business owner after selling the bookstore, which she renamed South Main Book Company, in 2019. Her focus during the past year has mainly been on being a parent to her infant daughter, Harriet. 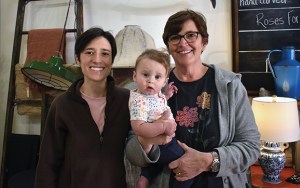 Alexander-Persse did manage to stay out of business, but only for so long. The draw of connecting with customers once again proved too strong.

“After I sold the bookstore, I really missed the customers,” Alexander-Persse said.

What sealed her decision to reenter downtown commerce was an impromptu visit to the vacant storefront at 119 S. Main St. in November. Even though she wasn’t ready to start a business at the time, seeing the renovated space got the wheels turning in her head. She started accumulating vintage goods and signed a lease in January.

“I really kind of started a business before I even signed the lease,” Alexander-Persse said.

The French Nest name was coined by Lauren and is a nod to Alexander-Persse’s affinity for Paris and European-inspired decor.

Alexander-Persse’s commercial return to downtown has been well received, she said. Most of the faces she’s seen have been familiar, especially those who have visited The French Nest on weekdays. She’s even had customers walk in, not knowing it’s her shop, and exclaim how similar it feels and looks to Grayshores Trading.

Operating on the 100 block of South Main Street once again, Alexander-Persse is working alongside longtime friends.

“I love the community down here,” Alexander-Persse said. “Cheryl (Goins) at Pottery 101 and Bob (Lambrecht) at Critters are some of my best friends. I just enjoy it. I couldn’t imagine being out away from downtown and on my own somewhere.” 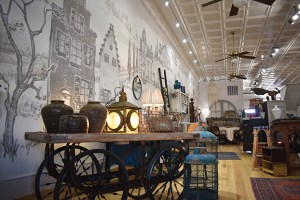 Wendy Alexander-Persse picks almost all of the vintage pieces in The French Nest herself, only choosing items she’d have in her own home. Ben Stansell/Salisbury Post

Along with furniture and decor Alexander-Persse procured from her trusted pickers and vendors, The French Nest features products made locally by her friends, including soap crafted by Teri Fox and linen aprons made by Cindy Morgan.

“I was able to call a few friends that I knew had certain talents and say ‘Can you create this for the store?’” Alexander-Persse said.

The subtle, yet striking mural on one of the store’s walls was painted by another friend, Cara Reische, who also designed the shop’s logo.

The store’s candles, Alexander-Persse said, have been flying off the shelf. So too have many of the shop’s other offerings.

Alexander-Persse isn’t looking to get rich off of her latest endeavor. She gave up that quest long ago.

“In my 20s I felt panicked to make money, make ‘my mark’ in a big way,” Alexander-Persse said. “Then I came to realize it’s really about making your corner of the world beautiful, make it work for yourself and show some kindness to the rest of the world.”

Rowan County improves in health rankings, looks to keep climbing in the future

SALISBURY — The health of Rowan County residents and the community are on the rise, according to a recently released... read more