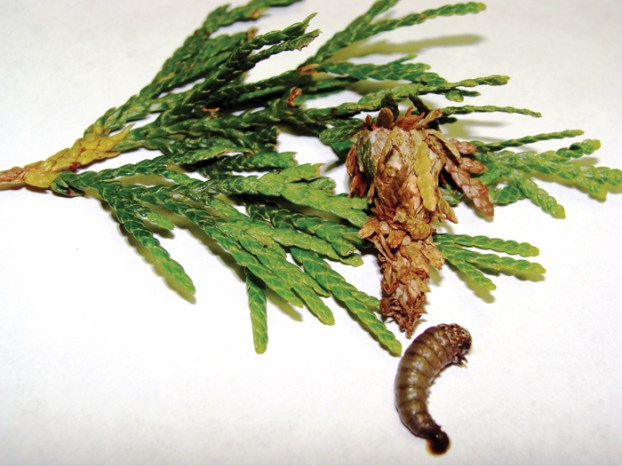 A few years ago, Leyland cypress was considered the perfect shrub for crowded urbanites. Unfortunately, these shrubs have become overplanted, sharing the same fate as red-tipped photinias and Bradford pears. Overplanting has made the shrub very susceptible to insects and disease problems within the landscape.

Bag worms became a serious problem about 10 years ago.  These insects often defoliate shrubs in a matter of days, easily killing the plant. Fungal diseases are also a serious problem with six fungal diseases easily destroying hedges and other plantings. Phytophthora root rot and Armillaria root rot are two major root diseases causing plants to decline slowly and eventually die. Unfortunately, there is no control for these diseases. Removal of affected plants is the best solution.

Cankers are fungi that affect both trunk and limbs causing dieback. Prune out the infected portions and avoid heavy fertilization and irrigate during dry periods. Spacing plants greater than five feet apart that will allow needed air movement to reduce the incidence of fungal disease problems. Tall, weak branching makes shrubs susceptible to damage from both ice and high winds. Those considering pondering a new hedge or replacing dying Leyland cypress should consider alternatives such as the newer arborvitae cultivars or Cryptomeria japonica. Hollies such as “Nellie R. Stevens” and Greenleaf holly also develop as excellent border and screening landscape materials.

Darrell Blackwelder is the retired horticulture agent and director with the North Carolina Cooperative Extension Service in Rowan County. Contact him at deblackw@ncsu.edu .

Spring is springing at Hurley Park

By Danelle Cutting For the Salisbury Post I was remarking the other day that I think we need to change... read more