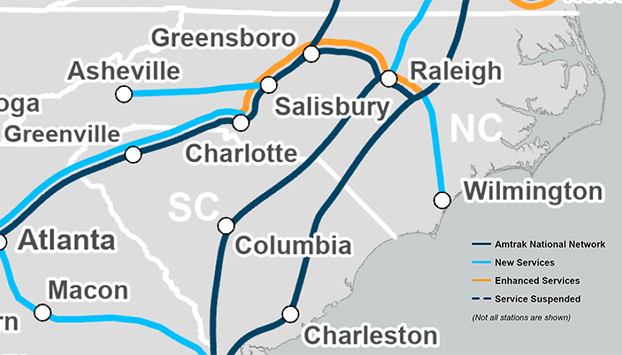 There are rare cases when presidents announce major initiatives and there’s something local to pay attention to right away.

But that’s the case with President Joe Biden’s American Jobs Plan. After Biden rolled out his multi-trillion-dollar proposal last week, Amtrak provided a map and some details about how its routes could be affected.

The map shows a new route from Asheville to Wilmington and “enhanced services” along an existing line known as the Carolinian, which runs from Charlotte to the Raleigh area. I haven’t been able to determine exactly what enhancements would be made — whether it means better trains, more frequent trains or something else. The map also shows a new route from Charlotte to Birmingham, which would follow Interstate 85 to Atlanta and I-20 to Birmingham. It appears to add a train along a portion of the Crescent, a route starting in New Orleans, going through Salisbury and ending in New York.

The plan that contains it is just that — not finalized. A bill still needs to be written by Congress and approved by the U.S. House and the Senate, which could be a minimum of multiple months away. Once it’s finalized, the bill will spend an eye-popping sum of money over a period of years to fix the nation’s infrastructure.

If initial reaction is any indication, Republican criticism will put a sharp focus on anything that’s not transportation related, the types of tax increases or the fact there are tax increases at all to pay for spending. Rep. Richard Hudson, R-8, got off to a head start last week when he said the bill does too little to rebuild roads, highways and bridges.

“This partisan bill is just another massive spending Trojan horse for political payoffs,” Hudson said. “Our country and our infrastructure deserve better.”

Infrastructure, of course, is more than roads, highways and bridges. It’s internet service for rural neighborhoods and clean drinking water for communities with lead pipes. It’s improved public transit, too, and he Amtrak plan provides some hope for those who see the benefits of public transit.

With the right train schedule in place, it’s easy to imagine getting dropped off at the Salisbury Station, taking a ride to Charlotte and using a bus or light rail to get to a Hornets or Panthers game. Never mind a designated driver. With good public transit, it’s OK for everyone in the group to enjoy drink in moderation. How about a train ride to Kannapolis for a night out and a Cannon Ballers game? None of those are realistic possibilities now. A schedule with more frequent trains is needed for that. Amtrak officials might counter that more ridership is needed to make more frequent trains happen.

Still, it’s exciting to dream about taking a train to the beach or the mountains for a weekend trip. Leave the car behind and enjoy immersing yourself in the destination.

Some particularly good new for local businesses: the new route that goes from Asheville to Wilmington would require a stop here for anyone traveling from south of Salisbury. If there’s time between trains, that could mean lunch, dinner or window shopping downtown.

It’ll sound like a nightmare to a lot of people. How do you get around while you’re there? Public transit is somewhere between sub-par and nonexistent in most cities. Using ride-sharing services such as Uber or Lyft to get everywhere while you’re at the destination would quickly get expensive. How do you fit all your vacation stuff on the train? What about COVID-19?

Those criticisms are reasonable.

American cities, towns and suburbs are designed with personal vehicles in mind. The country is a lot bigger and more spread out place than European cities that make public transit easy. Making transit cost-effective, frequent enough and fast-enough means building a system from scratch in most communities.

For North Carolina, however, it’s a good start to enhance service in the most populated part of the state — Charlotte to Raleigh — and add two popular vacation destinations.

If you’re looking for something local to pay attention to in Biden’s infrastructure plan, focus on spending for Amtrak.

Quotes of the week: ‘Going to help other people’

“They’re compensated, but they get that compensation on top of being able to know what they’re doing is going to... read more