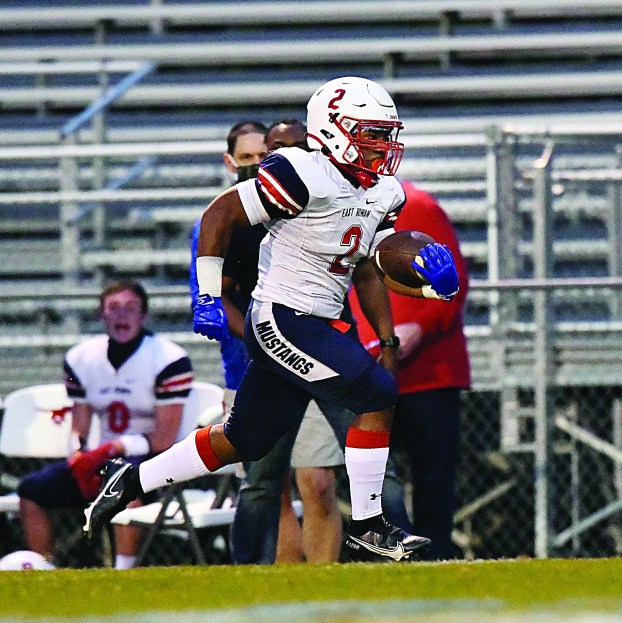 East’s Cal Hayes Jr. rushed for 344 yards against Robinson in 2001. West Rowan back KP Parks had set the county mark in 2009 with 356 yards against Carson.

The game included a lengthy lightning delay in the third quarter.

East took a 31-10 lead prior to the lightning delay on the strength of two Pinckney TDs, and he racked up his fifth and sixth TDs after play resumed. His fifth TD came on a 69-yard run.

East got the ball at the North Iredell 48 with about two minutes left after a failed onside kick. Pinckney got one last carry down to the NI 30, and the Mustangs took a knee on the final snaps.

CHINA GROVE — CP Pyle’s 10-yard TD run in overtime and Andrew Beaver’s PAT lifted Carson to a wild 56-55 win over South Iredell in the finale for both teams.

Carson was one first down away from closing things out in regulation with a 49-41 lead, but the Cougars lost a fumble. South Iredell scored with six seconds left in regulation and added a 2-point conversion to force overtime.

South Iredell got the ball first in the overtime period. The Vikings scored a touchdown, but a try for two points was stopped. That put Carson in position to win with a TD and a kick. Pyle scored on first down, and Beaver kicked the PAT after several South Iredell penalties.

South Iredell took its only lead of regulation at 29-28 after a safety and a TD.

Alex London threw four TD passes, two to Jake Harris and one each to Brodie Johnson and Easton Mullis.

CONCORD — No Bell Games are routine, but there wasn’t much excitement to this one.

A.L. Brown won its sixth straight in the long-running series by thumping Concord 28-0.

Cam Kromah threw a TD pass to Isaiah Black late in the first half for a 21-0 halftime lead, and Kromah and Black teamed up again for the only TD of the second half.