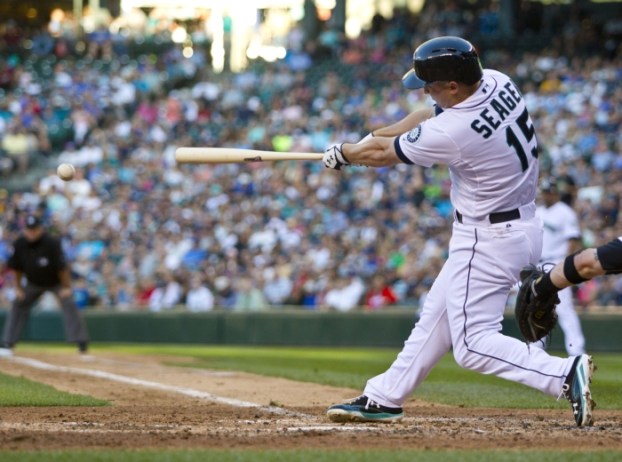 Kyle Seager's RBI gave the Mariners a victory in the first game of a doubleheader with the Orioles on Tuesday. (Associated Press file photo)

BALTIMORE (AP) — Kannapolis native Kyle Seager’s RBI double in the eighth inning helped the SeattleMariners earn a 4-3 victory over the Baltimore Orioles in the makeup of Monday’s rainout.

In the second game of the doubleheader Tuesday, Ramón Urías hit a game-ending single with two outs in the seventh inning and   Baltimore defeated the miscue-prone Mariners 7-6 to earn the split.

César Valdez (2-0) pitched a scoreless inning for Baltimore, which had lost four in a row and six of seven. Seattle’s three-game winning streak was halted.

“We’re just trying to get better,” Orioles manager Brandon Hyde said. “We had some guys off to some slow starts offensively. You see a lot of pressing going on with our hitters. Hopefully, rallies like we had and wins like this can kind of relax some guys.”

Urías singled up the middle to win it for Baltimore, which scored five unearned runs off three Seattle errors in the nightcap.

“It does leave kind of a sour taste in your mouth,” Seattle manager Scott Servais said. “We did a lot of good things today. Just the errors in the second game are what got us a little bit.”

The Mariners scored four runs in the third off Baltimore starter Dean Kremer, including three on José Marmolejos’ second homer of the season. Kremer gave up four hits and struck out three in three innings.

The Orioles responded with four unearned runs off Seattle starter Nick Margevicius in the third. Baltimore tacked on two more in the fourth, as Cedric Mullins’ RBI double extended his hitting streak to all 11 games this season and 15 games dating to 2020.

Sam Haggerty’s two-run homer off Adam Plutko in the Seattle seventh made it 6-all before Urías won it in the bottom of the inning.

“Today I think I had some pretty good swings and I was able to make some hard contact,” said Urías, who also homered in the first game. “I’m very happy I was able to contribute to the victory for my team. I’m looking forward to receiving more opportunities and show what I can do out there.”

In the first game, Seager’s one-out double to center off Tanner Scott (0-1) scored Mitch Haniger as the Mariners improved to 3-0 in extra-inning games this year.  Casey Sadler (0-1) had retired the first two batters in the seventh before walking Maikel Franco. The reliever then misplayed Ryan McKenna’s grounder for an error, followed by throwing a wild pitch.

Rafael Montero (1-0) earned the victory despite blowing his third save in five tries. Justus Sheffield allowed two runs and three hits in six innings, and Kendall Graveman earned his first career save.

Mariners: LHP James Paxton will undergo season-ending surgery. Paxton left his April 6 start — his first since returning to Seattle on a 1-year, $8.5 million deal —after 1 1/3 innings with left elbow discomfort. … Servais said OF Kyle Lewis (right knee) took some at bats in an alternate site game Monday and said it was “very realistic” to expect Lewis to return in the next week.

Orioles: Hyde said he is optimistic OF Austin Hays (right hamstring strain) can log some game action at the team’s alternate training site in the next few days. “Hopefully that goes well, and we’ll see him sometime shortly after that,” Hyde said.

Mariners: RHP Justin Dunn (0-0, 5.79 ERA), who allowed three runs in 4 2/3 innings against the Chicago White Sox in his lone start of the year, faces an AL East team for the first time in his career.

By Mike London mike.london@salisburypost.com LANDIS — Tyler Rea spent some time in a wheelchair, so he’s thankful for every waking... read more