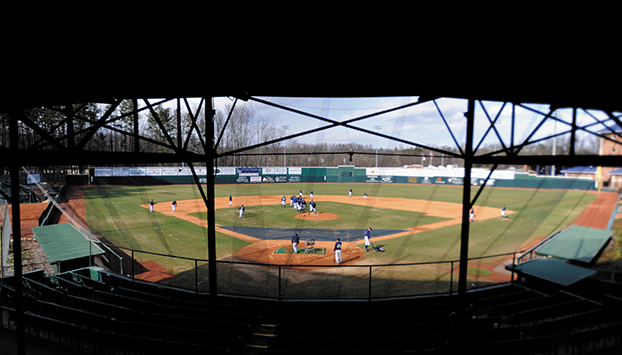 College baseball: Last days of Newman Park … as we know it

SALISBURY — The last days of the baseball cathedral known as Newman Park, home to Catawba baseball since 1926, are upon us.

The natural grass and the feel of Newman Park that so many have come to know and love through chilly Catawba College springs and sweltering American Legion summers are numbered.

The park is on the verge of undergoing a massive facelift.

Construction crews are set to begin work in early June on long anticipated renovations. The first phase of a transformation will include replacing the existing field with synthetic turf.

Once the turf field is in place, new dugouts, new bullpens and new locker rooms will follow.

The “Campaign for Newman Park” has raised almost $3 million, with the ultimate goal set at $12 million.

Jim Gantt — Rowan American Legion head coach since 2001, Catawba head coach since 1997 and a player who belted a grand slam for the Indians in 1989 — says he won’t be all that emotional about saying goodbye to an old friend.

“I love this place, but there’s also been a lot of blood, sweat and tears here,” Gantt said. “I’ve never minded mowing grass, but every thunderstorm has meant a lot of dadgum work trying to put the infield back together. It’s time for turf. When the bulldozers show up in June, I’ll probably cry my eyes out for about five minutes, but then I’ll be fine.”

Gantt says the toughest part of this weekend won’t be saying goodbye to the old park. The rough part will involve the human element. The hardest thing will be watching the members of this senior class taking the field at Newman for the last time. A number of local products of Rowan American Legion have put together wonderful careers at Catawba that have been unusually long and unusually productive.

Normally, those players would’ve departed in 2020, but when COVID abruptly shut down that season, with Catawba looking like a steamroller, they returned for one last chance to play for Gantt, to play with each other, to play for championships.

“I’m happy for those seniors, and we’ve played this season for them,” Gantt said. “Senior Days are always hard for me, but this one is going to be one of the toughest.”

Catawba is 25-7 overall and has won huge non-conference regional games, including Tuesday’s victory over a sixth-ranked Mount Olive squad. Catawba is 20-6 and in first place in the SAC, although it’s been a challenge to get there.

The biggest obstacle came when two of Catawba’s top four starters were shut down for a while due to potential exposure to COVID.

“I get it, COVID is serious, but I don’t think we’ve had any players with COVID,” Gantt said. “These are young guys, physically fit guys. We had one case of mono and one case of the flu. We had a guy who struggled with allergies. A lot of people have worked very hard to make it possible for us to play, but with all that the things you have to go through to play, this has been the hardest season of my coaching career. I’m sure it’s also been the hardest one for our players. This is supposed to be the best year of our seniors’ lives, but it’s been a tough year for them.”

At 1:30 p.m., on the field, Catawba will honor and recognize and thank a very special senior class for its achievements and for its persistence.

Catawba is scheduled to play Belmont Abbey in Kannapolis on April 19 and will play at UNC Pembroke April 20.

Next will be the SAC tournament in Kodak, Tenn.

“We’ll be tested for COVID again before the tournament,” Gantt said. “So hold your breath.”

Not long after the tournament, and hopefully the D-II playoffs, people will start watching for the bulldozers.

Gantt sees that day as a new beginning, not as the end of anything.