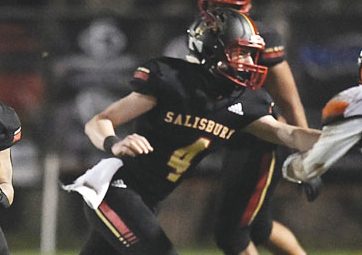 Salisbury's Jackson Murphy has caught three touchdown passes this season but his other intangibles make him a key for the Hornets on offense and special teams. File photo by Wayne Hinshaw, for the Salisbury Post

SALISBURY —Murphy’s Law states that if anything can go wrong, it will.

But in the case of Salisbury senior receiver Jackson Murphy, a lot of things are going right.

Murphy has three touchdown catches for the Hornets, but his largest thrills have come from his work as the long snapper.

“Best memory so far this season had to be the Central Davidson game,” Murphy said. “I snap it and get down the field and make my first real tackle. We get a penalty, so we’ve got to punt it again. I snap it again and get down there and make the tackle again. That’s going to be hard to beat.”

Not that he isn’t trying.

His three trips to the end zone haven’t been routine.

“Murphy had to make a good play on all three of his touchdowns, but he’s become a consistent contested-catch guy,” Salisbury head coach Brian Hinson said. “You’ve got to win some of those one-on-one battles in order to be successful. He’s been winning them.”

Murphy got his first varsity TD against West Rowan on opening night, got the second one in a big Central Carolina Conference matchup with Ledford, and snagged the third one last Friday as the Hornets closed the regular season with a 62-3 win at South Rowan that clinched a playoff berth.

“Vance (Honeycutt) made a really good throw, and I was able to go up over the DB and get it,” Murphy said.

Murphy and Honeycutt have been friends, as well as teammates, since their days as seventh-graders at Knox Middle School.

“We play multiple sports together and we do have some chemistry,” Murphy said. “I’m not as fast as some of our receivers, but Vance always knows where I’m going to be and I know where he’s going to put the ball. He trusts me; I trust him.”

Murphy is all over the place, and not just on the football field. He produces a Podcast along with SHS golfer Will Fowler. He’s a lawn-care service entrepreneur. He was a reserve on the basketball team and he’ll be a starter on the baseball team after football ends.

“It’s been a good year,”Murphy said. “Better than I ever expected.”

Like all of his teammates, Murphy’s mental and physical preparation for this season was disrupted by COVID.

“We were working really hard in the summer, and then the season got delayed and then there was serious doubt if we were even going to have a season,” Murphy said. “That put a damper on things to some extent. Even when they announced there would be a spring season, it wasn’t easy to get back into it mentally. I spent a lot of the down time playing golf, but I also lifted weights and got stronger. Then we did get the chance to play, and we’re all thankful for that.”

The Hornets didn’t look like world-beaters early, but they’ve steadily gotten better. Murphy has been a big part of it, making catches, long-snapping — and blocking. He made some nice blocks on Friday, as Salisbury made effective use of bubble screens. Murphy’s blocks helped fellow receivers, usually Marcus Cook, get loose for big gains.

Murphy’s older brother, Jake, also was a receiver for the Hornets. He graduated with the Class of 2017.

“Jake was a better blocker than me, but I’ll claim being the better receiver,” Murphy said. “Of course, Jake would tell you that’s just because we’re throwing it more now.”

Murphy got his first taste of varsity football as a sophomore when Salisbury had need of his long-snapping skills.

He’s only had one bad snap in three seasons.

Murphy only had a handful of receptions as a junior, and didn’t have any big plays, but he’s blossomed as a senior.

“More size, more maturity and a lot of reps,” Hinson said. “He’s become one of the more valuable guys in the program.”

Friday first-round playoff kickoffs for Salisbury at Maiden (2AA), Community School of Davidson at North Rowan (1AA), West Rowan at A.C. Reynolds (3A)  and T.C. Roberson at A.L. Brown (3AA) are all at 7 p.m.

Hinson said Maiden has an athletic team with talented skill people. Maiden plays several athletes both ways, which could benefit the Hornets in the fourth quarter.

The Salisbury-Maiden and Community School-North Rowan games are considered virtual toss-ups by the folks who provide power ratings. West Rowan is a two-TD underdog at Reynolds, while A.L. Brown is favored against  T.C. Roberson.

It remains a season where nothing can be taken for granted. COVID knocked Yadkin Valley Conference champion North Stanly out of the 1AA state playoffs earlier this week. That means Polk County, the team that is receiving a forfeit from the Comets, will go a month between games.

College baseball: Last days of Newman Park … as we know it