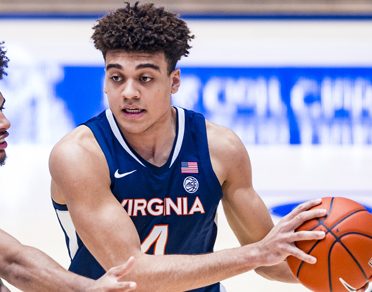 File photo courtesy of ACC Justin McKoy averaged 3.5 points and 3.3 rebounds for the Cavaliers this season.

CHAPEL HILL — North Carolina has added Virginia transfer Justin McKoy. The school announced Tuesday that the 6-foot-8 forward has signed after spending the past two seasons with the Cavaliers.

McKoy averaged 3.5 points and 3.3 rebounds in 11.2 minutes per game last year, starting four of 19 games for Virginia. McKoy is from Raleigh and played in high school in Cary, both being within 30 miles of the Chapel Hill campus.

The Tar Heels recruited McKoy under Hall of Fame coach Roy Williams, who retired earlier this month. New coach Hubert Davis was an assistant under Williams for nine seasons.

In a statement, Davis said McKoy has the versatility to play either forward position while also showing defensive mobility.

The school announced Coleman’s decision Tuesday. That came after the 6-foot-7 forward out of Richmond, Virginia, saw a limited role last season by averaging 1.1 points and 1.4 rebounds in 5 minutes per game.

Coleman played spot minutes in each of the final 11 games for Duke, which missed the NCAA Tournament for the first time since 1995. He played double-digit minutes only twice during the season.

Duke’s frontcourt next year will lean on 7-footer Mark Williams, who thrived down the stretch, and 6-9 power forward Paolo Banchero as the nation’s No. 3 ranked recruit according to 247sports.

FORT WORTH, Texas (AP) — TCU added a fifth Division I transfer when Western Carolina forward Xavier Cork joined the incoming class for the Horned Frogs and coach Jamie Dixon. Cork, who is from Sulphur Springs, Texas, played 58 games the past two seasons for Western Carolina. The 6-foot-9 forward led the Southern Conference this season by shooting 64.1% from the field while averaging 12.1 points and 6.1 rebounds per game.

LEXINGTON, Ky. (AP) — Kentucky senior forward Olivier Sarr has declared for the NBA draft and will forgo his remaining collegiate eligibility after one season with the Wildcats.

NEW YORK (AP) — RJ Barrett scored 18 of his 24 points in the third quarter and the New York... read more