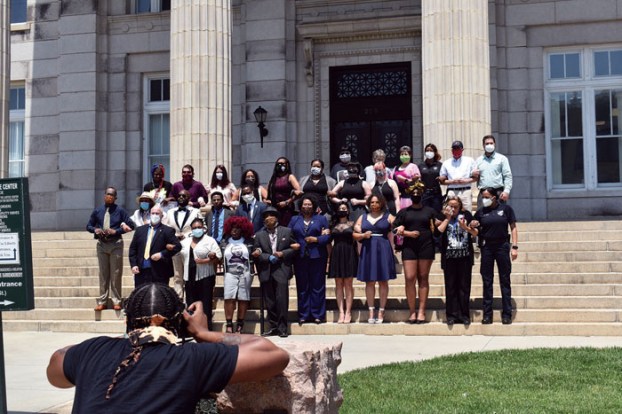 Salisbury Post file photo — A group of protesters gathered at the Rowan County Courthouse in their "Sunday best" on June 4, 2020, to send a message of unity to the family of George Floyd.

SALISBURY — Mahogony Koontz checked to make sure she read the text message right.

“He’s guilty,” stated the message from a friend.

Nearly 11 months after former police officer Derek Chauvin knelt on the neck of George Floyd’s neck in Minneapolis, Minnesota, for nine minutes, resulting in his death, the verdict was “guilty.” A Minnesota jury convicted Chauvin on counts of second-degree murder, third-degree murder and second-degree manslaughter.

“I was shocked really. It really amazed me. They actually did something,” said Koontz, a college sophomore from Salisbury who organized local protests last year in the weeks after the incident.

She was simultaneously happy and concerned its was a moment Americans need to be happy about.

“Police could have been held to account,” she said. “But now we have a leg up, and now it’s time to show police officers that you can get the same time if you do what happened to George Floyd.”

Gemale Black, president of the Salisbury-Rowan NAACP, said he was equally shocked and that he hopes the verdict will show people that police officers can be convicted for wrongdoing.

“Hopefully it’s a start that, no matter if you wear a badge or what type of power you may be in, you can’t do this to people, especially unarmed Black people,” he said. “But I’m still just shocked. … I honestly thought it was going to go the other way.”

Floyd’s death last year set off international protests for racial justice, including in Salisbury. Here, people gathered in the downtown area for a number of nights in a row at the Square, near the “Fame” Confederate statue, in drive-thru protests and on busy streets.

Rev. Anthony Smith called the guilty verdicts a “historically significant step toward what accountability looks like in the aftermath of a murderous act by a police officer, a murderous act that happens disproportionately to Black and Brown people.” The protests and the backlash to them, Smith said, revealed the deep roots of systemic racism and its strange fruit: racial inequity.

The list of work still to accomplish is long, he said, including moral repair, reparations, the dismantling of systems such as voter suppression, Medicaid expansion, raising the minimum wage, ending cash bail, reimagining law enforcement toward a public safety model, fair and equitable housing and full funding of public education, especially in poor communities of color.

“These steps and more would further add meaning to the guilty verdicts. All Black Lives Matter,” Smith said.

The Salisbury City Council met for its regularly scheduled meeting within an hour of the verdict being announced, and Mayor Pro Tem Al Heggins spoke near the end of the meeting about it.

“I just want to breathe a sigh of relief for myself and also for many African-Americans across our city based on the decision that was made today in the Derek Chauvin trial,” Heggins said. “That was a monumental decision for many African-Americans. I was glad to see the outcome of that, and I think that it’s a great way to continue to propel us forward in our relationships with our community and our police department.”

Heggins also expressed gratitude for the Salisbury Police Department and credited the department with doing a “tremendous job” with its community policing.

SALISBURY — Without having ever stepped foot in Salisbury, Matthew Achak has already created several dozen jobs for residents in... read more