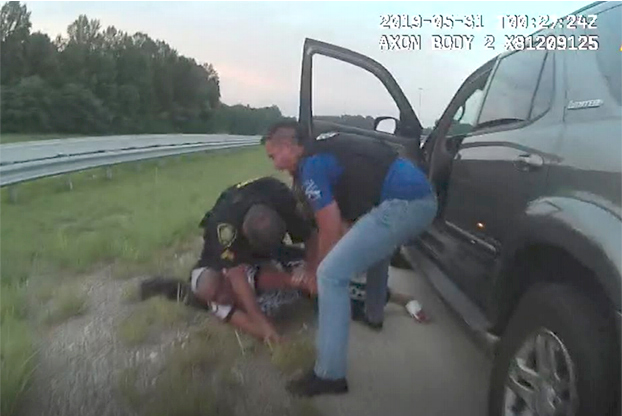 A still image from a body worn camera included with the lawsuit filed in federal court.

A federal lawsuit filed by a Georgia woman claims officers from Salisbury and Rowan County used excessive force during a traffic stop in 2019 when they pulled her from the car by her hair and tore her rotator cuff.

The lawsuit, filed Wednesday in U.S. District Court for North Carolina’s Middle District by Stephanie Bottom of Atlanta, claims she posed no threat to officers from the Salisbury Police Department and the Rowan County Sheriff’s Office when she was pulled over in May 2019. But they approached her vehicle with guns drawn and later violated her rights by using excessive force, the lawsuit said.

Bottom, now 68 years old, is a Black librarian. She said she was driving to Raleigh for a funeral in May 2019 when she was pulled over for speeding and failing to heed to blue lights. The suit says she was going 10 mph over the speed limit — 80 mph in a 70 mph zone.

Bottom said she was listening to music loudly in her car and did not realize she was being pulled over, according to the lawsuit.

The lawsuit, which requests a jury trial, alleges two officers grabbed Bottom by her arm and her hair, later throwing her out of the vehicle and on to the ground. Once on the ground, officers twisted Bottom’s arm behind her back, causing her “shoulder to ‘pop,’ tearing her rotator cuff and causing severe injury,” the lawsuit said.

A Salisbury police officer involved in the stop “bragged about ‘grabbing a handful of dreads,’ and said ‘at that point she earned it,'” the lawsuit said, citing footage from the officer’s body camera.

Bottom said all of the arresting officers were white.

When she asked for medical assistance, she estimated that an hour elapsed before officers called for help, the lawsuit said. Bottom had surgery to repair the tear but the injury prevents her from raising her left arm above her head.

One of the officers named in the lawsuit, Devin Barkalow, declined to comment to the Charlotte Observer but no longer works for the police department. The other officers named in the suit are Adam Bouk, a sergeant for the Salisbury Police Department, and Mark Benfield, who is listed in the Rowan County Sheriff’s Office directory as a master deputy. Sheriff Kevin Auten is named only in his official capacity as the sheriff and is not alleged to have been involved in the incident.

Linda McElroy, the city of Salisbury’s communications director, declined to comment on the pending litigation and said, “The Salisbury Police always strives for positive interactions with our residents and visitors, including in cases where we may suspect criminal activity.” The Rowan County Sheriff’s Office has not responded to a request for information from the Salisbury Post.

Bottom pleaded guilty to failing to heed blue lights. She was also charged with speeding and resisting arrest but those were dismissed.

“Ms. Bottom was peaceful at all times, and officers knew they were dealing with an elderly woman,” said Ian Mance, a lawyer with EmancipateNC who represents Bottom. “Our complaint alleges these officers had no reason to use any force, much less the level of force they employed. Ms. Bottom wasn’t even arrested.”