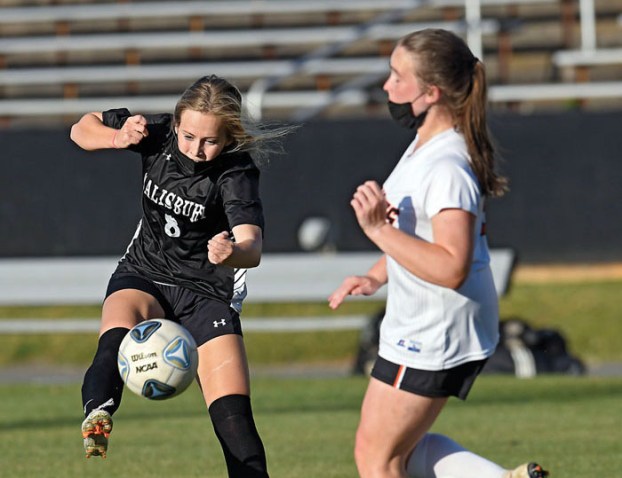 SALISBURY — The truth hurts — and it was delivered loud-and-clear Monday night.

“I think they did a really nice job of man-marking Sutton Webb,” longtime SHS coach Matt Parrish said, moments after the Hornets (9-1, 6-1) suffered their first loss. “They made it twice as difficult for her to get into space and score — and we failed to provide options on a secondary and tertiary level. Even if she did get loose and shot on frame, there was no one there to help. So you go with what works for as long as it works, then make adjustments.”

“I knew we had to contain their strongest players,” he said. “But we also stuck to what we know and what’s been working all season. We had to keep No. 8 (Webb) from getting any quality chances. We played our style, but we adapted to them.”

In a match that was more boxing than ballet, Salisbury emerged with renewed determination. It likely will finish second in the standings — ending a three-year reign as league or co-league champion  — and have to travel in the first round of the 2A state playoffs.

“It isn’t make or break,” said free-wheeling midfielder Lillie Rusher. “We’re still a strong team, but we didn’t play our best game. I think it makes us even more excited for the playoffs. We still have a good shot because (North Davidson) is as good or better than any one seed we’ll face.”

North (10-1, 7-0) peppered six shots at goalkeeper Hannah Schmeltzer in the scoreless first half, including the drive freshman Keelan Moore rang off the crossbar in the 30th minute.

“Easily the most dangerous opportunity for either team in the first half,” said Parrish. “That was legit. Sometimes a little space is all it takes for these really good players — and she’s really good. We were fortunate, no doubt.”

Salisbury’s best scoring chance was foiled with 2:45 remaining in the first half. On a designed corner kick by Rusher, Webb headed a ball that North keeper Madison Musgrave swallowed for a key save. The Black Knights broke through at 12:07 of the second half, when Kyndall Moore converted a corner kick by senior Emma Berrier, beating Schmeltzer with a high header.

“We stayed aggressive, found the ball and put it in the back of the net,” Duarte explained.

Webb indicated there may have been confusion along the SHS defensive line. “It’s always hard to mark in the box, to find someone, when it’s chaotic like that,” she offered.

Parrish was equally befuddled. “I don’t know why or how their leading goal-scorer is unmarked on a set piece,” he wondered. “I don’t know if it’s a lack of communication, but it’s easiest to blame me and it’s probably my fault anyway. I’ll take that one.”

Salisbury played a lot of kick-and-chase in the ensuing minutes, searching for a spark. With 10 minutes to play, Parrish moved Rusher from center back to attacking midfielder, to no avail.

“We didn’t have a lot of offensive chances, like we normally do,” said Muire. “Things weren’t clicking up top. It just didn’t go our way.”

North capitalized on a defensive giveaway and added an insurance goal with 32.1 seconds remaining. Berrier swiped a pass from a Salisbury defender and fired a low shot past Schmeltzer.

“My defender sent that ball that their girl finished,” Parrish said. “She just one-timed it and put it away.”

When the final horn sounded, the teams saluted each other from their respective sidelines. North celebrated a well-deserved and title while the Hornets prepared for their next challenge. SHS closes its regular season Wednesday at South Rowan.

“For all intents and purposes, it was a 1-0 game until 35 seconds were left,” Parrish concluded. “And it was a set piece. A lot of times the difference between two evenly matched teams — and a game of this magnitude — are set pieces. They executed one and we didn’t. You tip your cap and say, ‘Well done.'”

NOTES: Salisbury outscored South Rowan, 7-0, when the teams met March 24. … This was only the fifth career loss — and second in conference play — for Salisbury’s six seniors. They’ve triumphed 55 times. … The Hornets won CCC crowns in 2017 and 2018 before tying West Davidson for first in 2019. … Salisbury had not allowed two goals in any previous game this spring. These were the fourth and fifth scores it has yielded. … The shutout was North Davidson’s seventh of the season. It hosts Ledford in Wednesday’s regular-season finale.