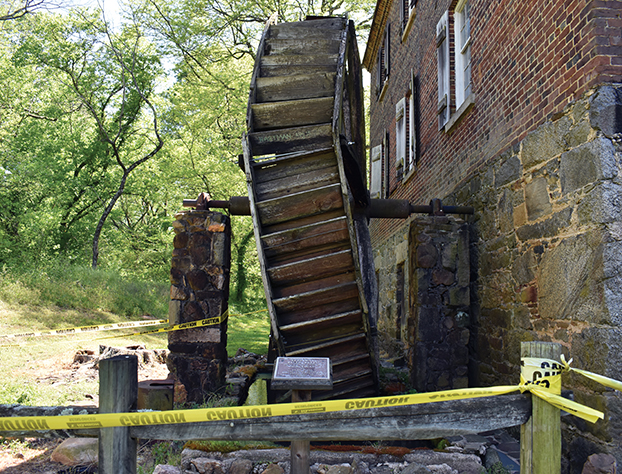 Cain is supervisor at Sloan Park, where the mill is located, and was replacing the battered caution tape that was there before, an effort by the park’s staff to deter anyone from attempting to climb the wheel’s mossy, partially broken spokes.

After churning water for several decades, the wheel behind the historic structure has fallen into disrepair and disuse. For the second time in five years, Rowan County has posted a request for proposals on a project to restore the structure to its former glory, or as close as possible.

“We have received a lot of feedback from people wanting to know about the grist mill wheel and when we were going to try to do something about it,” said Don Bringle, Rowan County parks and recreation director. “The county manager has authorized us to do an RFP to get businesses to bid on being able to rebuild and replace the existing water wheel that’s out there.”

Kerr Mill, listed on the national register of historic places, was constructed in 1823 by Joseph Kerr for use on his 2,000-acre plantation. The original water wheel on the property was used to ground grain into flour. The property was purchased by James Sloan in 1908. Sloan and his wife, Carrie, donated it to the county in 1973.

The original water wheel on the property was lost long before the county received the property. Despite attempts to uncover it through excavation, the wheel was not found.

Kerr Mill was without a wheel until 1989 — when Keith Yount, a member of the park’s board at the time, built a new one at his Sherrills Ford Road construction company with the help of several park employees. The effort to build the 15.5 foot structure took several months and required Yount to dig a pit for workers to spin it around as needed. 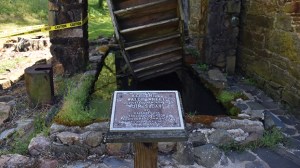 The Kerr Mill water wheel has suffered water damage since it was built by Keith Yount in 1989. Ben Stansell/Salisbury Post

When the county first requested proposals to restore the wheel in 2018, it was Yount’s grandchildren who stepped forward to take on the project, Bringle said.

“There was a local family who were grandchildren of Yount who were going to build that at material cost in honor of their grandfather, but for whatever the reason they were never really able to fulfill their obligation,” Bringle said.

Bringle said the Parks and Recreation Department has tried to get funding for the project into its budget for the past several years, but didn’t secure the needed money again until this year.

As a result, the wheel has continued to decay.

A victim of the elements and time, the wheel’s wooden blades have been slowly rotting since it was originally installed. Cain, who has supervised the park for 20 years, said they used to protect the wheel using Thompson’s water sealant, but even that failed to preserve it after several years. Caulking the blades and spokes was no remedy either.

The only salvageable part of the wheel now, Bringle said, is likely the metal in the middle.

“Hopefully the metal has not deteriorated to a point where they can’t use that, but that is yet to be determined,” Bringle said.

The goal of the project, Bringle said, is to once again have water running through the wheel to demonstrate for park visitors how the mill once worked.

Cain said it would “mean a lot” to have the wheel turning again.

“It’s a big asset to the park when it’s running,” Cain said. “You can even see it running from the road.” 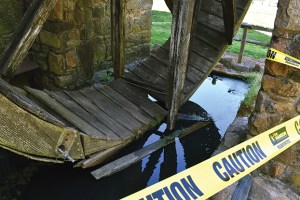 Despite attempts by the Sloan Park staff to preserve it, the water wheel has deteriorated over time. Ben Stansell/Salisbury Post

Bringle said he isn’t sure how many nearby businesses or people have the expertise or tools to complete such a restoration project. He also said he isn’t sure exactly how much the project will cost, since the price of lumber has increased during the pandemic. The county has “adequate funds to cover a reasonable quote,” he said.

The deadline for proposals is May 19 at 3 p.m. Submissions must be sealed and clearly labeled “Water Wheel Restoration” on the outside and should be submitted to the Rowan County Finance Department to the attention of David Sifford, purchasing agent. Applicants should submit one marked original and two complete copies of the proposal.

The contract will likely be awarded by June 7.

Knox teacher featured in State of the State address

SALISBURY — Felecia Young never expected to be part of the governor’s annual address on the past year in the... read more