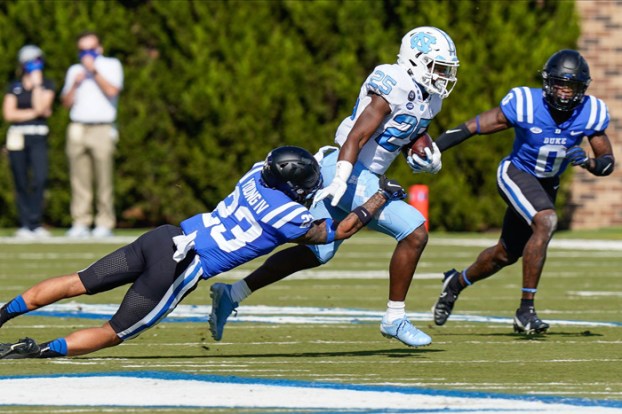 Broncos trade up to draft UNC back Javonte Williams

ENGLEWOOD, Colo. (AP) — The Denver Broncos traded up in the second round of the NFL draft Friday to grab bruising North Carolina running back Javonte Williams with the third selection of the day.

The Broncos entered Round 2 with the 40th overall selection. They gave up their fourth round pick (No. 114) to the Falcons to move up five spots and grab one of the players they viewed as a first-round talent and one who can beef up their thin backfield.

Williams was the third runner to come off the board after Najee Harris of Alabama and Travis Etienne from Clemson were selected in the first round.

“I definitely feel like I was the best running back in the draft,” Williams said. “Just having to sit there through the first round yesterday was hard.”

The Broncos recently let Phillip Lindsay go to the Houston Texans after he struggled in 2020 to provide a solid 1-2 punch with starter Melvin Gordon.

The Falcons also sent a sixth round pick to Denver in the deal.

An AP All-America second-team selection who led the nation in 2020 with 75 avoided tackles, Williams rushed for 1,140 yards and 19 touchdowns with a 7.3-yard average last season. He also caught 25 passes for 305 yards and three TDs.

He’s the son of three-time Pro Bowl cornerback Patrick Surtain Sr., who played in Miami when Denver general manager George Paton was working for the Dolphins two decades ago.

Paton indicated that he had hoped all along to select Surtain even as most mock drafts had the Broncos grabbing a quarterback in the first round.

“We’ve been watching this kid for three years,” Paton said. “I knew the family; I knew the dad and I knew where he came from. We tried to hide our interest a little bit. I never spoke with Pat. I never Zoomed with him. I told our coaches don’t call him. I told our scouts don’t call, don’t Zoom. I didn’t go to the Alabama pro day.”

It was all by design to catch everyone by surprise.

Paton called the versatile Surtain, who won 36 of his 38 starts with the Crimson Tide, a perfect fit for head coach Vic Fangio’s defense in a loaded AFC West division that features three of the league’s highest octane offenses.

Surtain doesn’t fit the mold of today’s bold, brash talking cornerback but he does exude a quiet confidence, suggesting, “I think I have what it takes to be an elite corner in this league.”
Surtain said he’ll continue letting his play speak for itself.

By David Shaw For the Salisbury Post WELCOME — Oops, they did it again. For the second consecutive week, Salisbury’s... read more