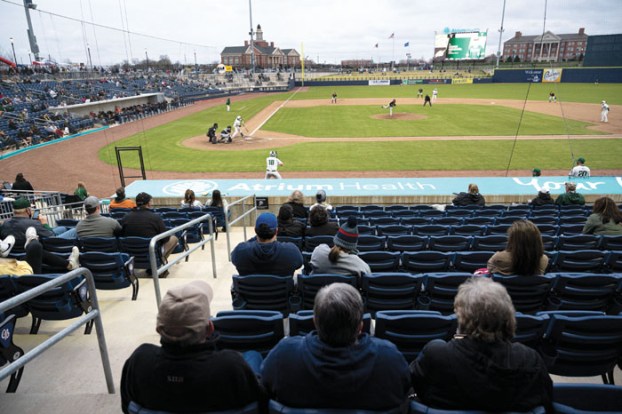 Josh Bergeron / Salisbury Post - Fans look on inside of Atrium Health Ballpark on March 23 as UNC Charlotte and Appalachian State University play the first game at the city of Kannapolis’ new stadium. In the background is Kannapolis City Hall on the left and part of the N.C. Research Campus on the right.

KANNAPOLIS — In the previous several months, local high school and college baseball teams have squared off at Atrium Health Ballpark in downtown Kannapolis.

The four games hosted by the ballpark this spring have served as appetizers for what’s to come on Tuesday night, when the Kannapolis Cannon Ballers will for the first time take the field to face the Down East Wood Ducks at 7 p.m. The opening day matchup will be the first of six games in six days the Cannon Ballers will play against their Low-A-East Central Division foe.

“The entire gauntlet of emotions is starting to set in a little bit,” said Matt Millward, the team’s general manager. “We’re running on adrenaline right now.”

The first baseball game played in Atrium Health Ballpark’s history was a matchup between the Charlotte 49ers and the Appalachian State Mountaineers on March 23. The game, sold out at 30% capacity, was the first time the ballpark’s staff greeted and served fans. While the game went off without a hitch, Millward said there were clearly areas that needed improvement.

“That first night we experienced some longer lines than we wanted to, in terms of food and beverage and we realized a lot of it had to do with line queuing,” Millward said. “There was everything down to our ticket operations, which we had problems with our scanners our first night.”

With each subsequent game, including matchups featuring Davidson, Catawba College and a high school battle between A.L. Brown and Northwest Cabarrus, Millward said the staff grew more comfortable and efficient.

“We’ve, A, learned a lot these past few months and, B, have already started to implement some changes and adjustments,” Millward said.

The staff at Atrium Health Ballpark will see a record crowd on Tuesday night. With the stadium now allowed to open at 50% capacity, the opening game is already sold out. In order to comply with social distancing guidelines and ensure pod-style seating can be adhered to, Millward said about 2,500 fans will be in attendance.

That’s a far cry from what he expected in the fall — before the COVID-19 vaccine distribution started.

The Cannon Ballers have hosted two vaccine clinics already, and Millward said the team is planning to host a clinic during a game sometime later this month.

Although Gov. Roy Cooper has lifted the mandate on wearing masks outdoors, Millward said fans will still be required to wear a mask in the ballpark in compliance with the MLB’s guidelines. Millward said the club will “ease into” any loosening of restrictions during its 60-game season.

The ballpark’s stands have been dotted with fans wearing a variety of team colors over the past few months, but the Cannon Ballers’ blue, red and white will likely be the dominant shades on Tuesday night. Even without having watched the Cannon Ballers play, fans have clamored for the team’s apparel.

Since the team rebranded from the Kannapolis Intimidators almost two years ago, Millward said they’ve ranked in the top 10 of minor league baseball merchandise sales each month.

“It’s truly an impressive feat,” Millward said. “We have the No. 1 selling fitted hat in all of minor league baseball, which I kind of tout.”

Although the team’s official roster and identity still aren’t clear — players arrived from Arizona on Saturday — Millward said he believes the team will bring an entertaining style of play to Kannapolis.

“I’ve heard we’ve got some offense, a lot of power, so I think the balls will be flying out of this ballpark,” Millward said. “It’s an exciting team to watch. We’ve got more of a veteran pitching staff. Supposedly out of the farm system, we have one of the best, if not the best, teams within the White Sox affiliates.”

Millward said there will be plenty of fresh faces for fans to get to know. The team will be managed by Guillermo Quiroz, who had a decade-long career playing catcher in the MLB.

The “pomp and circumstance” associated with opening day will begin as soon as gates open at 5:30 p.m. Millward said there will be a special surprise during the singing of the national anthem. Once the game concludes, fans and people in downtown Kannapolis will be treated to a “huge” firework display.

While the opening game is sold out already, Millward said individual tickets, starting as low as $10, can be purchased for games in May by calling the box office at 704-932-3267 or online at www.milb.com/kannapolis/tickets.

A limited number of physical seats along the baselines will only be available for a handful of games during the month. The majority of tickets remaining for purchase will be designated as “Concourse Passes,” which provide general access to enjoy all of the sights and sounds of Atrium Health Ballpark. Individuals with Concourse Pass tickets are welcome to bring along a blanket and enjoy the game from the grass berm in left field (outside chairs prohibited) or watch the action from anywhere along the ballpark’s concourse.

Individual tickets are not being sold for games in June or July because the club wants to continue to monitor pandemic restrictions.