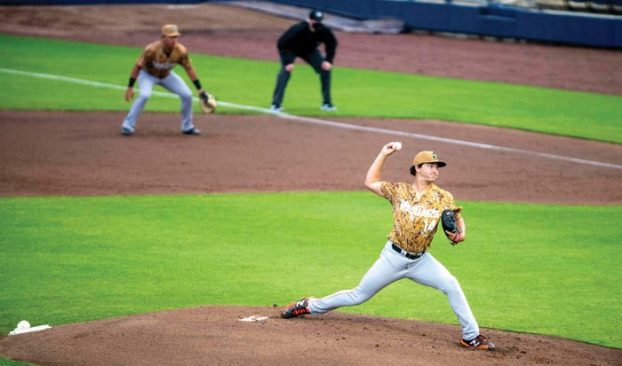 KANNAPOLIS — No doubt it would’ve been easier making his long-awaited, long-stalled pro pitching debut for the Down East Wood Ducks on a quiet night in Kinston, but here was former Carson phenom Owen White doing it a lot closer to home.

Doing it on a season-opening and ball-park opening night in Kannapolis, less than 20 miles from where he grew up.

Doing it in front of masked-up and socially distanced fans, a reminder that COVID is still around.

How many did White have in the crowd that he identified as family?

For a while on Tuesday, it looked White might be postponed again. It was still raining at 6 p.m., an hour before game time.

Skies abruptly started to brighten at 6:15, as if a higher power had taken charge of the preceedings. White and a lot of fans breathed a sigh of relief.

He would pitch against a Kannapolis franchise that had undergone a rebranding and a ballpark change and hadn’t had baseball in 614 days.

By 7:09, they were playing ball. By 7:15, White, his pro career detoured by Tommy John surgery and rehab, and then by a COVID year, stood on the mound in the scenic new park.

By chance, Carson head baseball coach Chris Cauble was there. His team was scheduled to play Tuesday, but the Cougars were washed out.

“I always liked the Kannapolis Intimidators field, but this was totally different and felt like a step up,” Cauble said. “This felt like being in Atlanta, a smaller venue, of course, but this place has that major-league feel.”

Baseball is a global game. The first three Kannapolis Cannon Ballers that White, a 21-year-old right-hander, faced were from Georgia (the state, not the country), the Dominican Republic and Cuba.

Three pitches into his pro career, White owned his first strikeout. Kannapolis leadoff man Weaver Cabera was trudging back to the dugout, and White had tied a record held by many.

But no one said it would be easy. All of these people are being paid to play baseball for a reason. White, a second-round pick by the Texas Rangers in 2018, fired a high fastball to Kannapolis shortstop Jose Rodriguez, looking to get ahead with a quick strike, but Rodriguez was ready to rip the first fastball he saw. White had given up his first pro hit, a solid double.

White got ahead of Bryan Ramos 0-and-2, but his next pitch found too much of the plate for  an 0-and-2 offering, and Ramos whacked a single.

White was in his first pro jam. He got out of it with a strikeout and a flyball.

The second inning went smoother. It’s supposed to be smoother against the 6-7-8 hitters. White got ahead 0-and-2 and coaxed a routine flyball. Then he got a quick, two-pitch out on the ground. He finished the inning in style with his third strikeout.

“Twenty-eight pitches and 22 strikes in those first two innings,” White said. “But then in the third inning, I started getting behind some hitters. You can’t do that at this level.”

The trouble began for White in the third with a flyball that looked catchable, but fell safely and then got booted around. When the smoke cleared, there was a runner at third with no outs.

Cabera was next. White fooled him, but it turned out to be a swinging bunt. White fielded the ball cleanly and would have gotten the runner coming from third out with a good throw home, but he made an errant throw.

If White could do one thing over, he’d make a good throw home. That play shortened his night considerably. He wound up throwing 32 pitches in the third inning. There were two walks. White experienced several more pro firsts — his first mound visit and his first time being taken out for a reliever.

The Wood Ducks were down 2-1 when White exited, but they eventually rallied to win 8-4.

“Fortunately, we’ve got a scrappy team, and they had my back,” White said.

White struck out four. He doesn’t know yet what the radar gun had to say about his first outing, but he said the Down East coaches saw a lot more good than bad.

White said he won’t pitch again in the six-game series in Kannapolis. His next outing will come in Kinston.

White is the third pro that Cauble coached in high school.

Wade Moore played for Cauble at West Rowan and was drafted by the Washington Nationals after doing some serious slugging for Catawba in 2010. There were nights that Moore played right field for the South Atlantic League’s Hagerstown Suns in Kannapolis against the Intimidators. The guy next to Moore, the big guy roaming center field, was Bryce Harper.

Carson and Charlotte 49ers pitcher Colton Laws, 25, has fought his own battles with injury since being drafted by Toronto in 2017 , but is still active. On Monday, he was assigned to Vancouver by the Blue Jays.

“I got to see Wade play in Kannapolis, but Colton has always been too far away,” Cauble said. “So it was great to get a chance to see Owen pitch.”

Cauble was impressed by what he saw from White.