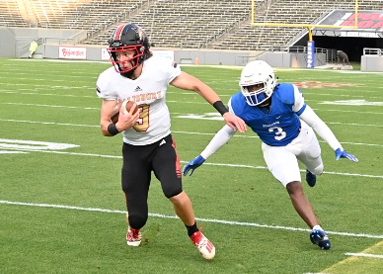 Honeycutt, a senior quarterback, ran for four touchdowns and threw for the dagger TD as Salisbury beat St. Pauls 42-14 in a 2AA state championship game played on Thursday night at N.C. State’s Carter-Finley Stadium.  Honeycutt was voted game MVP. St. Pauls was the latest victim to have Honeycutt seemingly contained, only to wind up chasing him into end zones.

The senior is headed to UNC to play shortstop, so this was his last football hurrah. He made the most it, netting 110 rushing yards and throwing for 105.

“It was the perfect way to go out,” said Honeycutt, who sang the praises of the Hornets’ offensive line.

Salisbury, of course, finally made it back to a state title game in 2019, but promptly was creamed 34-0 by Shelby.

But that was almost a year and a half ago. A lot of the Hornets, including Honeycutt, have done a lot of growing in that span of time.

“We had a bad loss in that Shelby game,” Hinson said. “But that experience definitely helped us tonight. The guys had a better idea of what to expect. The coaches knew what to expect. We were better prepared and had the team better prepared. We did a lot of good things. I thought we did a tremendous job of tackling them on their short passes.”

Defensive leaders included linebackers Jalon Walker (12 tackles) and Jaden Gaither (10 tackles) and linemen Zae Clay (11 tackles, one sack) and Nicholas Hall (10 tackles, 1 sack). Any of those four could have been Most Outstanding Defensive Player, but the nod went to Hall, a burly junior who is listed at 285 pounds, but probably is even larger. Freshman Deuce Walker made an interception, while freshman Mike Geter was a serious factor with 54 rushing yards, two nice punt returns and the biggest stop of the night.

Salisbury (9-2) dominated the game statistically, but there were plenty of anxious moments late in the first quarter and early in the second when St. Pauls seized the momentum. There were more trials and tribulations in the third quarter when the Hornets cracked open the door and temporarily invited St. the Bulldogs to climb back in the game.

But Salisbury’s defense was ever-present.

“It wasn’t easy,” said Jalon Walker, a national recruit who is committed to Georgia. “St. Pauls is a strong offensive team that can run or pass. But we were physical with them. We controlled their running game and got pressure on the quarterback.”

St. Pauls won the toss and wanted the ball. That proved to be a mistake. The Bulldogs (8-1) started inside their 20 and were punting after a three-and-out. Salisbury corner Jayden Gibson defended a third-down pass.

Salisbury scored quickly. Honeycutt hit Marcus Cook twice for nice gains, Geter zig-zagged for 22 yards, and Honeycutt wheeled around the left side for his first touchdown. Wade Robins added the first of his six PATs.

The next segment of the game was a repeat. Poor field position for St. Pauls and another punt. This time Clay made the third-down play. Salisbury got the ball on the St. Pauls side of midfield and added another breezy TD. Wells rammed for 17 yards down to the 6. Honeycutt scooted in from the 5, and it was 14-0 with 5:21 left in the first quarter.

But just when it looked like it might be a walk in the park, things went haywire.  An unsportsmanlike conduct penalty moved Salisbury’s kickoff back to the 25, and St. Pauls finally got solid field position when Waltay Jackson fielded Robins’ kick at his 17 and brought it back to the 45. QB Mikail Breeden connected with Jackson on a short pass that a missed tackle and a face-mask penalty turned into a 24-yard gain. Then Breeden found Jackson for a 14-yard score, and it was 14-7.

When Honeycutt couldn’t get the handle on a high shotgun snap, St. Pauls recovered at the Salisbury 28. Not long after that, the Bulldogs collected an odd touchdown when offensive lineman Daekwon Payne recovered a teammate’s fumble in the end zone. Just like that, one play into the second quarter, it was 14-all.

“For five or six minutes, St. Pauls played very well and we didn’t play well at all,” Hinson said. “It’s hard to drive it 80 yards on our defense, but we gave them field position with a penalty and then we gave them a very short field with the turnover. They had momentum. We had to find a way to get it back.”

Honeycutt and Jalon Walker would take it back, but it got worse before it got better.

“We just needed to stay calm,” Walker said. “There was nothing to stress about. We had to show them who belonged here.”

Needing a drive to break that 14-all tie, Salisbury’s next possession was a dismal disaster. Cook’s splendid kickoff return was wiped out by a tripping penalty. There was a false start and after a flag for delay of game, Honeycutt was forced to punt with his back to the 5-yard line, and the Bulldogs accepted the ball on Salisbury’s side of the field. But Salisbury’s defense stood firm, getting a monster three-and-out. Jalon Walker made the third-down tackle in space that forced a St. Pauls punt. Geter accepted that punt at his 17 and hauled it back to the 38.

More adversity followed in the form of a SHS holding penalty, and Honeycutt was staring at second-and-20.

“Jalon was in the game as a receiver and I was reading the corners,” Honeycutt said. “I knew I had Jalon open in the flat and I thought, ‘Get him the ball, and he’ll make a play.’ That’s who he is. He’s a playmaker.”

Walker (6-3, 220) took off like a running back and it took two men to bring him down. He got 22 yards. He moved the chains. It wasn’t a touchdown, but it was the game’s biggest offensive play. It was the momentum-changer the Hornets desperately needed.

An energized Salisbury defense pushed St. Pauls into a third-and-32 quagmire, and Deuce Walker made his interception when Breeden tried to go deep.

The Hornets had the ball at the Salisbury 43 after the pick, with just 1:48  left in the first half. Two plays went nowhere, but on third-and-11, Honeycutt scrambled, diving to midfield. When a critical 5-yard face-mask penalty was tacked on, the Hornets owned a first down.

Then Honeycutt was suddenly flying down the right sideline for 35 yards to the St. Pauls 10.

“That was all (receiver) Jackson Murphy,” Honeycutt said. “He made the block.”

With 30 seconds left in the half, Honeycutt found more daylight. His third TD of the half gave the Hornets a 28-14 lead at the break.

Salisbury got the ball first in the third quarter, but Wells lost a fumble on the second snap of the half.

At that point, up 28-14, your head says no — play it safe and punt — but your heart says go. The Hornets went for it, figuring there was about a 90-percent chance Wells could get a yard. If he could get that yard, they keep the ball, maybe for a long time, and maybe they drive for the knockout score.

But Wells slipped, as soon as he took the handoff. It was St. Pauls ball, and the Bulldogs knew, lucky or not, they still had a chance.

“Just a dumb decision,” Hinson said. “And now I’m kicking myself, hoping our defense can bail me out.”

The defense did the bailing, but it got dicey. St. Pauls pounded away with strong sophomore back KeMarion Baldwin. The Hornets slowly, grudgingly retreated toward their goal line.

On first-and-goal from the 10, linebacker Amare Johnson made the stop at the 7. On second down, it was Hall and Clay, dragging down Baldwin at the 4. On third down, Jalon Walker and Kevin Hayes halted Baldwin’s progress at the 1-yard line. On fourth-and-goal, with the game hanging on what happened next, Baldwin ran smack into Geter and fumbled. Salisbury had the stop.

“We did what we had to do, what we knew we needed to do,” Clay said. “We needed to execute, and we executed.”

The Hornets didn’t provide any more openings for St. Pauls. They got out of that ugly hole quickly. Honeycutt took it to the 6. Then he ran it to the 25.

“We come to practice every day, we work, we grind to be ready for times like that,” Honeycutt said. “I had great blocking.”

Suddenly Wells was running free, churning like a locomotive, and the Bulldogs couldn’t derail him until he reached the St. Pauls 34. It was a 36-yard jaunt.

Honeycutt connected with Geter for 16. Geter ran for 7. Then Honeycutt maneuvered the last 11 yards on two plays. With 1:48 left in the third quarter, the Hornets led 35-14 and were back in command. There was a 5-yard penalty donated by St. Pauls, but basically the Hornets traveled 99 yards in a bit over 2 minutes and on just six plays. It was a state-championship drive if there’s ever been one.

There would be one more score — a fitting one. Honeycutt to Jalon Walker for a 25-yard TD with 10:28 left. After that, the Hornets could start planning the celebration, which included a late-night police escort for the last few miles into Salisbury.

“That last touchdown was my play,” Hinson said with a grin. “I told them all week that was going to be a touchdown.”

The Hornets took a knee on their last three snaps.

St. Pauls accounted for 131 rushing yards and 104 passing yards. The Bulldogs managed 14 first downs, but the bending Hornets never broke in the second half.

The Bulldogs lost defensive end Enrique Lopez-Ray — he’s headed to Air Force — to an injury early in the contest.

But this night belonged to the Hornets. Hinson wrapped his victorious press conference with a Honeycutt story.

There was a day when the Hornets were conducting footraces. Honeycutt was just watching.

Finally, Honeycutt asked if he could join the fun.

“Then he won all the sprints,” Hinson said. “When North Davidson beat us (in March), they schemed for Honeycutt and did a good job of stopping him, but we learned from it. We’d always relied on him to make plays scrambling,  but then we put in some designed runs for him. Those plays paid off for us tonight.”

Check Sunday’s Post for more on the Hornets’ amazing season.