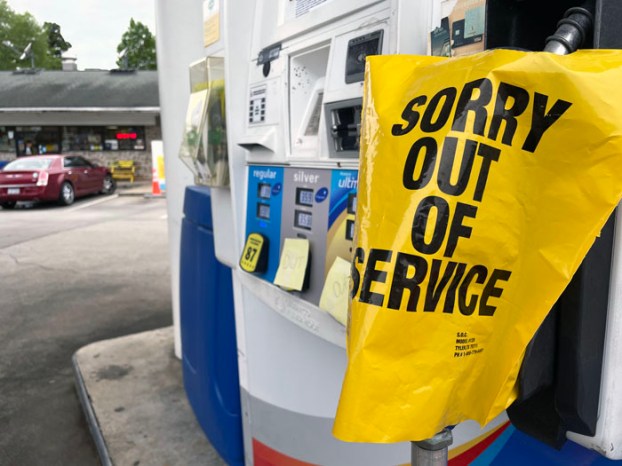 Natalie Anderson/Salisbury Post — Amoco gas station, located on 2412 South Main St., is one of many gas stations throughout Rowan County and North Carolina that is seeing its supply of gasoline quickly deplete due to "panic buying" from locals in light of a temporary halt of the Colonial Pipeline after a ransomware attack.

SALISBURY — A cyberattack on a major, regional gas pipeline anticipated to have an effect on the transport of gasoline for no more than a week, but “panic buying” has quickly depleted supplies across the state and in Rowan County.

On May 7, Colonial Pipeline, which connects from Texas to New Jersey and delivers about 45% of gasoline to the Southeastern states, was the target of a ransomware attack. Hackers encrypted the system and demanded the company pay a ransom. As a precaution, the pipeline temporarily halted its operations to work with the federal government to resolve the issue.

Followings news of the cyberattack and a temporary shutdown last week, Gov. Roy Cooper declared a state of emergency and temporarily suspended motor vehicle fuel regulations in an effort to move supplies throughout the state. The order waives the maximum hours of service for drivers as well as certain size and weight restrictions and penalties that would normally arise based on state laws.

“I have talked today with federal officials including Energy Secretary Jennifer Granholm and we have a full court press to get the Colonial Pipeline back up and fully operating quickly. Report price gouging and please don’t rush to top off your tanks,” Cooper said via Twitter Tuesday.

The pipeline announced Wednesday evening it was resuming operations, but the resulting “panic buying” is expected to exacerbate the issue and prolong supply replenishments.

Gary Harris, executive director of North Carolina Petroleum and Convenience Marketers, told the Post the issue was a logistical transport problem, not an issue of supply, and expected to be resolved within a week’s time. But with more and more people rushing to fill up their tanks and gas cans for storage, the issue is becoming supply for more states.

“The Colonial Pipeline has been very efficient at providing millions of gallons of fuel to the East Coast for a decade,” Harris said. “But the fueling system that’s in place was not designed for everyone to fuel up at the same time. Panic buying puts an increased stress on the system.” 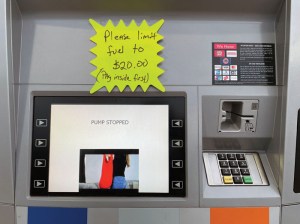 Natalie Anderson/Salisbury Post — Cheeseman’s General Store, located on Old Beatty Ford Road, posted signs on its pumps Monday instructing customers to limit their fuel purchase to $20 per vehicle in an effort to maintain the limited supply of gasoline until the Colonial Pipeline resumed operations and transport.

Harris reports seeing and hearing of people filling multiple 5-gallon cans when fueling as well as containers not designed to store gasoline. Harris said another problem arises if the gas is stored for too long without being used.

He said North Carolina and Southern states rely on wholesale distributors, or local oil companies, to buy unbranded gasoline from major oil companies. Businesses then contract truck drivers or supply their own to transport up to 8,000 gallons of gasoline at a time from the terminal rack. A local Shell station, for example, would then indicate the gasoline comes from Shell and is sold at retail price.

Todd Alligood, owner of Alligood Tire and Alignment, which sells gasoline from Shell, said his location ran out of regular-grade unleaded fuel Tuesday night and premium-grade fuel Wednesday morning. However, some diesel fuel was still available.

Alligood, like many other gas station owners, is unsure when the next supply will be delivered. He originally expected a new supply today, but on Wednesday he said that delivery would be prolonged and not include a full load.

Additionally, his distributor, which is based in Greensboro, reported to him Tuesday that 20 other stores were out of gasoline, which may put him further down the list for a delivery.

If there is a silver lining, Alligood said, it’s that he hasn’t witnessed a huge spike in the price of gasoline since news of the cyberattack. Before his supply was depleted, he reported regular unleaded fuel at $2.89 a gallon and noticed a similar price for nearby locations.

“I heard about this last week,” Alligood said, “but I thought it was business until usual until it started getting more recognition.” 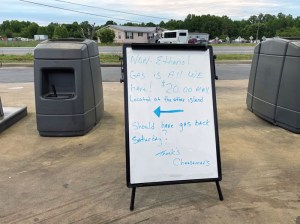 Natalie Anderson/Salisbury Post — Cheeseman’s General Store, located on Old Beatty Ford Road, posted signs on its pumps Monday instructing customers to limit their fuel purchase to $20 per vehicle in an effort to maintain the limited supply of gasoline until the Colonial Pipeline resumed operations and transport.

Chad Cheeseman, owner of Cheeseman’s General Store on Old Beatty Ford Road, told the Post his location also ran out of its unleaded supply Tuesday, and its super-grade and diesel fuel was depleted Wednesday. On Wednesday afternoon, he only had gasoline without ethanol, or pure gas, which is sometimes preferable for older car engines, boats and lawn mowers.

Cheeseman said he posted a sign outside on Monday instructing locals to purchase no more than $20 worth of gasoline. After realizing locals weren’t taking heed to the notice, Cheeseman deactivated the pumps, requiring customers to walk inside the store and prepay for gas. He recalled one customer filling up three 55-gallon cans with gasoline.

If Cheeseman didn’t move to shut off the pumps, his supply would’ve been exhausted by Monday night, he said.

A new load was projected Saturday, but Cheeseman estimates it will likely be Monday morning before another load is delivered. He reported being told stores shouldn’t expect to sit empty for more than seven days, but now he anticipates that could extend to 10-12 days.

As of Wednesday afternoon, GasBuddy.com, using data crowdsourced from app users, reported that 69% of North Carolina’s gas stations out of gasoline — higher than any of the other states that receive gasoline from the Colonial Pipeline. More than half of the gas stations in Virginia were out of gas. South Carolina inched toward 50% as well.

GasBuddy.com is also tracking local areas with gasoline supply shortages, which can be found at tracker.gasbuddy.com.