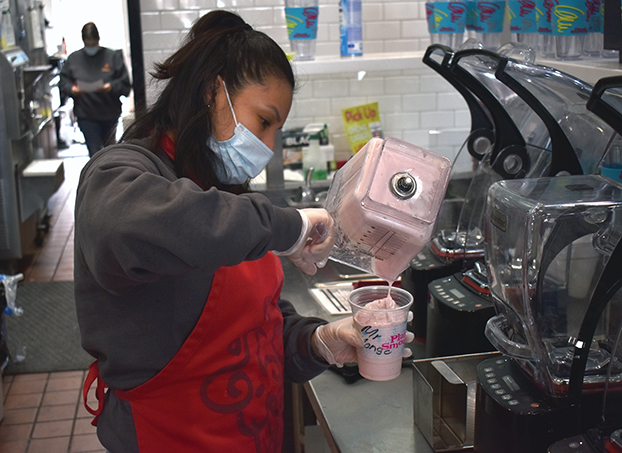 SALISBURY — When Traci and Brad Williams decided to open a Planet Smoothie location in the same space as their existing Cold Stone Creamery store, she thought she’d be giving customers a healthier option.

She didn’t expect to be serving ice cream before lunch.

“The first day, the Saturday that we opened, at 9:30 a.m. I had somebody come in and order a peanut butter milkshake,” Traci said.

By opening a co-branded Planet Smoothie and Cold Stone Creamery store, she also opened a surprisingly sweet loophole for some customers who crave a cup of chocolate chip ice cream or milkshake for breakfast. While some people have enjoyed ice cream to start their day, most customers who have visited the store at 343 Faith Road, Unit 12, since Planet Smoothie opened two weeks ago have come to try one of the new, fruity creations.

The pink Planet Smoothie sign is affixed alongside the red Cold Stone Creamery letters on the store’s facade, but the front of the building isn’t the only place the two chains, both owned by Kahala Brands, split real estate. The two stores coexist in the small railcar-like space inside, sharing the same staff, freezers and other resources.

So far, the unique marriage has been successful.

“To me, our one place has something for everybody,” Traci said. “If the kids don’t want a smoothie and would rather have a scoop of sweet cream or chocolate, then the mom or whoever brings them in can still get a healthy alternative.”

Traci was inspired to open a smoothie store several years ago, before she and Brad even owned Cold Stone Creamery.

“I had a couple health issues along the way the past several years, so I was constantly always looking for healthier alternatives like Juice Life, or diets and that kind of thing,” Traci said. “One of the diets that I did way back when was this one called Bella Nutra. It was kind of like a personal coach that you talked to every week. (My coach) kept telling me that she really thought I needed to open a juice bar or smoothie bar.”

“We’ve had to learn how to renegotiate and reimagine how to store things,” Traci said. “We ended up having to buy two new freezers.”

New video boards were added, and the store was updated to fit Planet Smoothie’s “more upbeat and modern” aesthetic.

The biggest change, Traci said, was moving one of two ice cream stones out of the store. The chilly, granite stones are the surface on which Cold Stone Creamery workers make concoctions. In the second stone’s place is a blender bar, where employees mix flash-frozen fruit and add-ins such as matcha green tea or powdered peanut butter.

Employees at the store are cross-trained, meaning they can just as easily mix together a Dragon Fruit Lemon Splash as they can top a waffle cone of vanilla with colorful sprinkles.

Training staff to handle smoothies in addition to ice cream was made easier by the fact that Traci and Brad recently purchased the already-established Planet Smoothie location in Greenville, South Carolina.

“My two girls have started calling me Elsa because they keep telling me that I’m building a frozen empire,” said Traci, referencing the popular Disney film series starring an ice princess.

Several staff members from Cold Stone Creamery in Salisbury traveled a couple hours southwest on I-85 to the Planet Smoothie in Greenville to learn the tricks of the trade. Training was also conducted by a Planet Smoothie representative at the Salisbury store over the past several weeks.

Anthony Goodnight, who has been the general manager at Cold Stone Creamery for over a decade, said he was excited to learn that he’d be overseeing a Planet Smoothie franchise as well.

“When we came down to (Greenville) to visit the store initially and I tried the product, I fell in love,” Goodnight said.

Goodnight said the Salisbury store has been busier in the past two weeks than it has been since he started working there in 2008.

“It’s been crazy,” Goodnight said. “Since I’ve been here, we’ve never had days like this with the numbers we’ve seen. (Traci and Brad) made a smart move and I hope we continue to grow.”

Goodnight, who Traci described as the “heart and soul” of the store, said he’s already noticed a new clientele visiting the store.

“I’ve seen regulars start to come in,” Goodnight said. “We didn’t open up until noon before this store started and now we’re open at 7 in the morning and we’ve seen customers start to trickle in around then. It’s nice to see. We felt like an evening time business and now we’re going to be an all day business.”