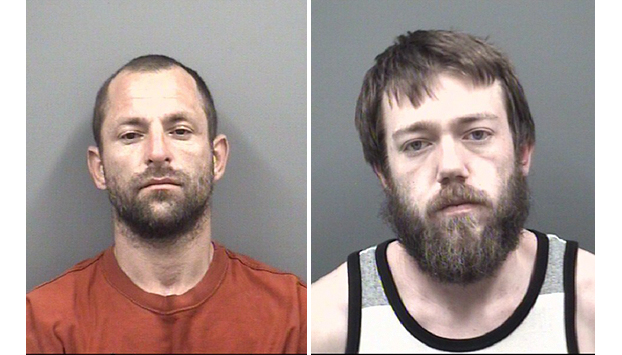 SALISBURY — Two inmates on Thursday attempted to escape from the Rowan County Detention Center, but only made it to Fulton Street before being captured.

Maj. John Sifford of the Rowan Sheriff’s Office said Dillon Leon Thomas, 24, and Freddy Dewayne Gentry, 34, were inmate workers, or “trustees,” and lingered near a roll-up door at the entrance to the jail in downtown Salisbury. When the door opened around 6 a.m. to let a delivery vehicle in, both men dashed out of the building and ran toward Fulton Street.

The Rowan County Sheriff’s Office and Salisbury Police Department responded to the incident, using a K-9 to track the inmates. Thomas and Gentry were located in the bushes of a home at 321 North Fulton St., about one-third of a mile away, and taken into custody at 6:24 a.m.

Both men were charged Thursday with escaping from a county or city confinement facility, a felony, and booked back into the Rowan County Detention Center.

Before the newest charge, Gentry was in jail on a number of charges from an incident in April where he allegedly used a stolen moped to take law enforcement officers on a chase from Salisbury to Kannapolis. His total bond is now set at $100,000.

Thomas was previously in jail for charges of possession of methamphetamine, failing to appear in court and a probation violation. His total bond is now set at $65,000.

Police chief to present use of force policy; city manager to present 2021-22 budget