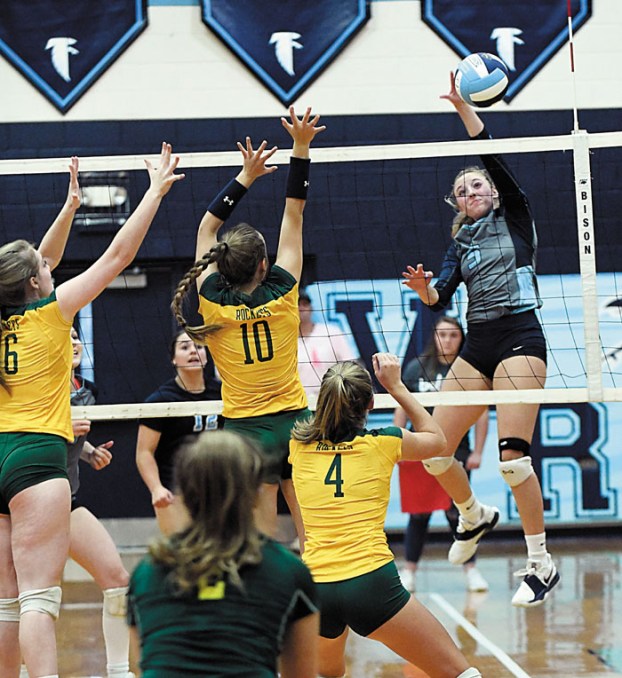 West's KK Dowling goes up for a shot. File photo by Wayne Hinshaw, for the Salisbury Post

MOUNT ULLA — Kaylin “KK” Dowling is a strong enough volleyball player that her career will continue in college at Queens and she batted .450 as a senior while excelling in center field for West Rowan softball.

Still, she’ll be remembered more for her vibrant personality than the flying kills, the excitable stomps, the line drives and the diving catches.

Dowling is the female winner of the second annual J.T. Bost Rowan County Sportsmanship Award. Bost, a well-known umpire and official in a half-dozen sports, was killed in a traffic accident in 2018. Andrew Poston, one of Bost’s colleagues, sponsors the award. A panel chooses the award. Carson’s Taylor Conrad was the 2020 winner.

While the concept of sportsmanship can’t be measured by statistics, it involves competing with fairness, ethics, respect and a sense of fellowship with teammates and competitors.

That sums up Dowling.

“She has one of those personalities that lifts everyone up,” West head softball coach Jimmy Greene said. “Everyone could see how much she cared, and there was zero fake news about KK. She’s free spirited. She really only cared about two things —  her teammates and winning.”

There are exceptional female athletes around the county. Dowling got to play with some fine ones at West. Even with shortened COVID seasons her senior year and a lost spring her junior year, Dowling played on volleyball teams that were 76-17 and softball teams that were 54-16. It was a nice run.

“In volleyball I was usually one of the leaders, but it surprised me when Coach Greene came up to me before my senior softball season and told me he was counting on me for a leadership role,” Dowling said. “Volleyball is my game, not softball. But I did my best.”

The daughter of long-time volleyball coach Jan Dowling, KK blossomed in the fall of 2019 on a terrific West team that went 28-1 and didn’t lose until the regional final.

A lot changed between that regional final in front of a wild, packed house and the quiet 2020 volleyball season. Volleyball finally led the return to high school sports back in the fall, although matches had to be played with 25-fan limits.

“Our energy had always come from the crowds, from the fans, especially from our student section,” KK said. “Without that, it all felt a lot different. I didn’t do any stomping my senior season. I really tried to keep my emotions in check, to be poised and calm and just focus on helping my teammates be the best they could be.”

Dowling was the best sort of leader.

“KK was a great teammate even when she wasn’t on the floor,” Coach Dowling said. “She was talking the whole time, trying to boost her teammates. She defended her teammates at the highest level, but she also let the other team know when they made a great play. She respects the game of volleyball. She respects everyone involved in it.”

In the softball season, West got down 9-1 early in a game at Carson, and Coach Greene called on the seniors to pull the team together. West came back to take the lead, before losing 13-12 in the bottom of the seventh. West rallied from that devastating loss to win five straight, including the NPC tournament championship and two road playoff games.

“KK was a big part of our season,” Greene said. ” She was the ultimate team player, a blessing to coach.  She never asked once about her batting average, her playing time or her position. Her personality was contagious, and she made us all better.”

Greene even got to witness his first “KK stomp” on the softball field. He’ll never forget it.

But all good things must come to an end.

“Walking off the softball field for the last time after we lost in the playoffs, I was surprised by how sad I was,” KK said. “I’m a volleyball player, but softball also was a big part of my life, and I loved it and I loved my teammates. I grew up a lot from playing softball.”

Dowling postponed her volleyball signing party until the very end of the school year, until after things had opened up some, and she could sign at her school.

From her first day on campus until her last, West Rowan meant everything to her.