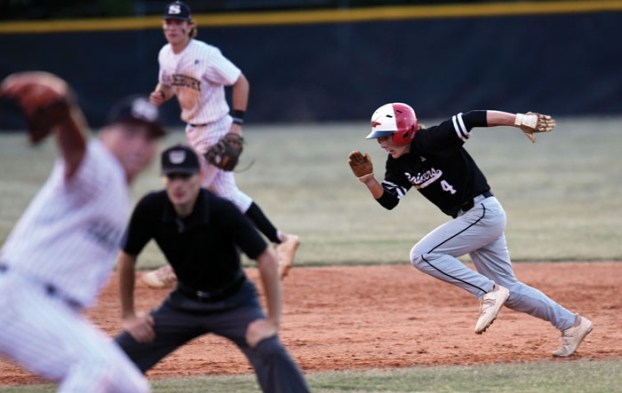 South’s Kane Kepley steals third during a game against Salisbury on June 1. photo by Wayne Hinshaw, for the Salisbury Post

That’s a first-round game in the Central Carolina Conference Tournament, with the third-seeded Raiders playing host to the sixth-seeded Hornets.

In first-round games that were able to be played on Monday, second-seeded Oak Grove beat No. 7 Central Davidson 2-1 and No. 4 Ledford beat No. 5 East Davidon 6-1.

That means the South-Salisbury winner will play in a semifinal at Oak Grove on Wednesday.

The championship game is set for Thursday.

The CCC teams are playing this tournament for a trophy and bragging rights.

South will be the No. 15 seed in the 2A West bracket and on the road in the first round. North Davidson will be randomly seeded 1 through 9, while Oak Grove will be seeded from 10 to 14.

There’s only one wild-card berth available in the 2A West bracket, but it appears certain to go to Ledford, the CCC’s No. 4 team. Ledford went 7-2 and is headed for a No. 16 seed.

Salisbury will be concluding its season in the tournament.

The last day for games to be played is Friday, June 11. Brackets and pairings will be finalized on June 12. The playoffs will begin on June 15, with rounds two and three following quickly on June 17 and June 19. The regional round is June 22.  State championships will be played on June 25-26.

In the North Piedmont Conference, there’s still quite a bit to be decided.

East Rowan drew the No. 1 seed for the tournament, but as far as the 3A state playoffs, East and Carson, regular-season co-champs, enter the tournament even, as they split with each other.

That game will now be played on Tuesday at 4:30 at East Rowan’s Staton Field. The winner will then take on the Mustangs in a 7 p.m. semifinal.

Third-seeded West Rowan will play at second-seeded Carson in the other semifinal. First pitch in China Grove is set for 7 p.m.

The championship game is set for Thursday at the best remaining seed. If East wins Tuesday, it hosts Carson or West on Thursday.

The NPC gets only one guaranteed spot in the 3A playoffs — that will be East or Carson, both went 8-2 — but the other is certain to make the 3A West bracket as one of four wild cards.

What’s at stake in the tournament is the serious difference in seeding. The team that enters the playoffs as the NPC champion will be seeded randomly from 1 to 7 in the 3A West bracket, and playing at home at least in the first round, while the wild-card entry will be seeded from 13 to 16, and on the road.

West Rowan went 7-3 and has a shot at a wild-card berth. The primary competition for the Falcons appears to be from the South Piedmont Conference, where four teams are still competing this week for two guaranteed playoff spots.