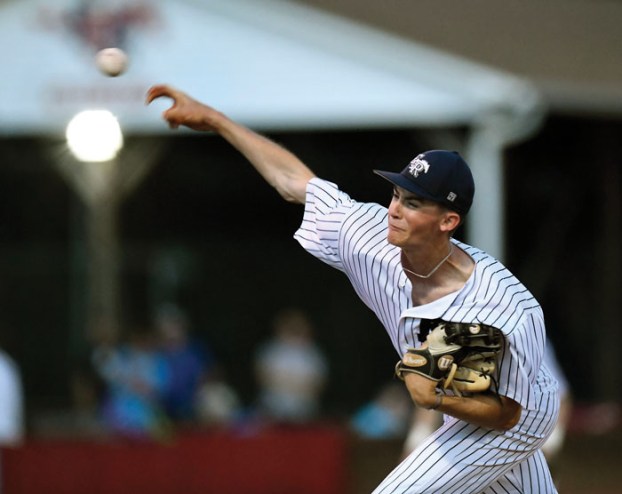 Chance Mako only gave up two singles in four-plus innings. File photo by Wayne Hinshaw, for the Salisbury Post

The top-seeded Mustangs benefited from six infield errors, scored 11 unearned runs and strolled past the visiting Raiders, 11-1 in five innings.

“At this point in the season, any kind of win is still win-and-advance,” East coach Brett Hatley said, moments after the Mustangs (11-2) proceeded into Thursday night’s championship game against West Rowan at Staton Field. “We talk to guys all the time about it — if you put the ball in play, good things can happen. If you go up there and swing-and-miss a whole bunch, you don’t get the chances we got tonight.”

East capitalized on plenty of chances, batting around in both the third and fourth innings. The Mustangs attacked the soft serves of losing pitcher Zac Compton, scoring five times on four hits in the last of the third. An inning later, they added six insurance runs without getting a hit.

“We hit the ball hard. That’s all it was,” said East designated hitter Morgan Padgett. “You put the ball in play and see what happens.”

ER sophomore Chance Mako — a 6-foot-5 right-hander with a popping fastball and an adequate curve — improved to 4-0 despite issuing six walks and committing an error. Without being dominant, he checked North (3-11) on two singles in four-plus innings. He allowed a last-inning run on a bases-loaded walk before reliever Mattox Henderson procured the last three outs, two on strikeouts.

“I didn’t pitch my best, but I did what I could,” Mako said after denting the 1.40 ERA he brought into the game. “Mattox came in and really helped me out. All in all, it turned out great.”

Before East’s bats erupted, Mako pitched out of a bases-loaded jam in the top of the second. He came all the way back from a 3-0 count and showed North DH Bryson Morrison a called third strike, then induced an inning-ending groundout by Landon Kanous.

“I get in my head sometimes and try to throw too hard,” Mako noted. “The way out is to throw it right down the middle.”

Meanwhile, Compton — a junior southpaw with a don’t-wake-the-baby arsenal — wasn’t as fortunate. He sailed into a squall in the East third, when North made its first two miscues. Mako sparked the rally when he roped a leadoff single into left field. Two batters later, courtesy runner Nate Hayworth scored the game’s first run on a double-steal. Four additional runs crossed after two men were retired — one on Aiden Schenck’s crisp single to center, another on Padgett’s run-scoring gapper to left-center and two on Austin Fulk’s smash up the middle.

“I hit a hanging curveball,” said Schenck, whose hit gave East a 2-0 lead. “Just took it right back where it came from. That’s what I try to do against pitchers like (Compton).”

“We didn’t make the routine plays,” insisted losing coach Derrick Wishon. “When you don’t, it can come back to bite you hard. That’s just the way it is.”

It’s how it was in the bottom of the fourth. North committed four errors, turned a double play and yielded six more runs. East’s Jake Hunter was credited with an RBI when his groundout made it 9-0.

“It a real boost for our confidence,” said Schenck, one of four Mustangs to score twice. “I mean, we had two close games with (North Iredell). But this is what happens when you put balls in play, don’t strike out and hit the ball hard.”

It left Hatley scrambling to concoct a game plan for West Rowan, which rallied for a late-ending, 5-4 semifinal win over Carson.

“Whoever we play, we’ve split with them,” he said some 90 minutes before West prevailed. “But this game, I liked the way we adjusted to their pitcher after the second inning — hitting balls on a line versus lazy fly balls to the outfield. See the ball, hit the ball, hit the other way. That’s it.”

NOTES: Fifth-seeded North advanced with a 6-4, first-round triumph over South Iredell in a game played earlier Tuesday. … The Mustangs edged third-seeded West (9-4), 2-1 on May 8 and dropped a 7-4 decision to the Falcons on June 1.