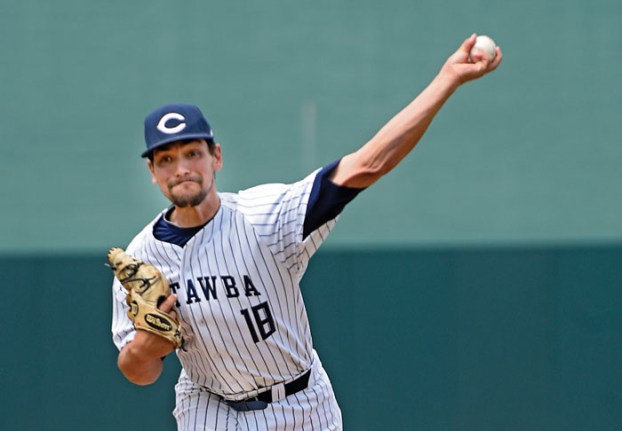 Catawba's Hunter Shepherd was named a first team All-America by the American Baseball Coaches Association. Shepherd batted .412 with 12 homers and 60 RBIs. File photo by Wayne Hinshaw, for the Salisbury Post

CARY —  West Rowan baseball fans will remember the epic extra-innings loss at home to Crest in the 2017 3A state playoffs.

Crest catcher Logan McNeely was the difference-maker in that game, and on Saturday he was named tournament MVP after leading Wingate to a 5-3 victory over top-ranked Central Missouri in the Division II national championship game in Cary.

Seeded sixth in the eight-team field, Wingate lost early in the tournament but came back to win five straight elimination games to take its first national title.

Wingate split a regular-season doubleheader with Catawba and the Bulldogs also beat the Indians 8-7 on the way to winning the South Atlantic Conference Tournament.

All-AMERICANS: A couple of local products were All-America selections in their final seasons at Catawba.

Hunter Shepherd, who was homeschooled, was named a first team All-America by the American Baseball Coaches Association. Shepherd batted .412 with 12 homers and 60 RBIs.

West Rowan grad Bryan Ketchie, who was named Southeast Region Pitcher of the Year earlier, is a second team All-America. Ketchie (10-1) was undefeated as a starter and posted a 1.82 ERA with 63 strikeouts and only nine walks.

Ketchie finished his career with 31 wins, tied for second with Tim Smith on Catawba’s all-time list. Nick Lomascolo is still No. 1 with 36 wins.

BIG TIME: Jackson Raper, who starred for Catawba at third base, continued to hit after playing this season as a graduate student at Illinois.

Raper made first team All-Big 10. He had two-homer games against Penn State and Northwestern and drove in seven runs in a game against Michigan.

NCHSAA: Some games around the state were pushed back to Saturday by weather, so the NCHSAA delayed the highly anticipated release of playoff pairings to today.

The NCHSAA also announced that J.P. Riddle Stadium in Fayetteville and Burlington Athletic Park will be the venues for the best-of-three state championship series on June 25-26. The NCHSAA hasn’t announced yet which classification will be playing at which site.

Playoffs start this week with a Tuesday-Thursday-Saturday format for the first three rounds. Regional championships are set for June 22.

LOOKING GOOD: While West Rowan didn’t have a good Wednesday against East Rowan hurler Jake Hunter, the Falcons did have a good Thursday when Central Cabarrus beat Robinson in a South Piedmont Conference game. The 6-0 victory by the Vikings left Central and Robinson at 8-4 in league play. West, which was 7-3 in league games in the North Piedmont Conference, should get the nod over both of them as far as conference winning percentage.

That should mean the Falcons will land the last wild-card berth available in the 3A West bracket.

West head coach Seth Graham doesn’t seen any way the Falcons aren’t in. Neither do the folks who make projections.

Northwest Cabarrus and Cox Mill went 9-3 and secured the two automatic berths from the seven-team SPC.

Getting the last possible berth doesn’t necessarily mean West will be seeded 16th. The wild cards are randomly seeded 13 through 16, so you may see West seeded higher than Carson even though Carson was co-champion of the North Piedmont Conference and finished ahead of West in the standings.

SHORT HANDED: Assuming the Falcons are in, they’ll be without two of their best players, as seniors JT Fecteau and Steven Smith had surgery last week.

“We’re down, but not out,” Graham said. “We’ve got some young guys ready to step up.”

SOUTH: As the only third-place finisher to earn an automatic berth in the 2A West bracket, South Rowan, which plays in the 10-team Central Carolina Conference, has been locked into a No. 15 seed for the playoffs for a while. The Raiders will be seeded behind all the 1s and all the 2s. They’ll be seeded ahead of the lone wild-card entry. That’s going to be Ledford.

The Raiders weren’t able to improve their seed by winning the Central Carolina Conference Tournament, but a 3-1 win at North Davidson for the first conference tourney title for the program in 18 years still provided a lot of momentum and confidence for a team that’s won seven in a row.

“A conference tournament, three games in three days, that really tests your pitching depth, but our guys stepped up to the challenge,” South head coach Thad Chrismon said. “And we got contributions up and down the lineup.”

South played a good chunk of this short season without key pitchers Haiden Leffew and Luke Hiskey and was without catcher Jacob Ritchie and left fielder Finch McMillin for a while, due to COVID contact tracing.

But now the Raiders are fully healthy and are capable of making a run. They’ll be on the road, but they won road games last week against highly regarded teams in Oak Grove and North Davidson.

“The top of our league is very stout,” Chrismon said. “It says a lot about our league that Ledford (the CCC’s No. 4 team) will get the wild card.”

Leffew, an impressive sophomore lefty who blew away Oak Grove with 10 strikeouts in five innings, is the probable starter for South in the first round.

South Piedmont Conference baseball promises to be exciting in the spring of 2022 with South Rowan moving into the same league as West Rowan, East Rowan and Carson. That league also will include Northwest Cabarrus, Concord, Central Cabarrus and Lake Norman Charter.

Seven of those eight programs had winning seasons.

CARSON: The Cougars are looking at road trips in the playoffs. The six-team NPC only got one automatic berth in the 3A playoffs, so Carson is one of the four wild cards. That means a random seeding from 13 to 16.

Sophomore Hayden Simmerson has emerged as the team’s ace and will probably get the ball for that first-round road game. Carson will be playing against a conference champion.

Catawba recruit Dylan Driver is batting .405 for the Cougars, while Caden Hudson is batting. 375 with 16 RBIs.

EAST: The Mustangs will be seeded anywhere from 1 to 7 in the 3A West bracket.

That could mean a string of home games this week, but it also could mean hitting the road as early as the second round.

All that’s certain at this point is that East will play at home on Tuesday.

“Home field should be an advantage for us, but our two losses were at home,” East coach Brett Hatley said. “We’ve played very well on the road.”

Padgett has crazy stats. He’s struck out 40, while walking two.

East’s offensive numbers took a big jump in that wacky 35-0 win against Statesville, but a lot of Mustangs already were having good seasons at the plate.

The Hornets also got super senior seasons from Chase Shoaf (.343) and Max Crawford (.375).  Shoaf and Crawford won two games each on the mound.

NORTH: The Cavaliers closed the books on an 0-8 season with an 8-4 loss to South Davidson. Zion Milton had two RBIs, while Joseph Hartman had a double.

They were the team’s leading hitters for the season, with Hartman batting .267 and Milton .250.

North made progress under coach Zach Tatarka. It’s most competitive games were its last two.

LEGION: Rowan County has released its schedule for the 2021 season.

While it’s nice to have officially sanctioned American Legion baseball back, it’s going to be a condensed season.

At this point, it’s a 16-game slate, although some games might still be added. Some programs such as Stanly and Stokes have elected not to field teams this year.

With renovations under way at Newman Park, the Legion team will play home games at Staton Field in Granite Quarry at 7 p.m.

Rowan County’s opener is scheduled for June 19 against Randolph County, although with East Rowan, Carson and presumably West Rowan in the playoffs, it figures to be a short-handed squad in the early going.

The Area III championship game will be played on July 24.

Cherryville is set to host the state tournament on July 27.

CANNON BALLERS: Kannapolis won on Wednesday, Thursday and Friday for its first winning streak and entered play on Saturday night with a 7-28 record.