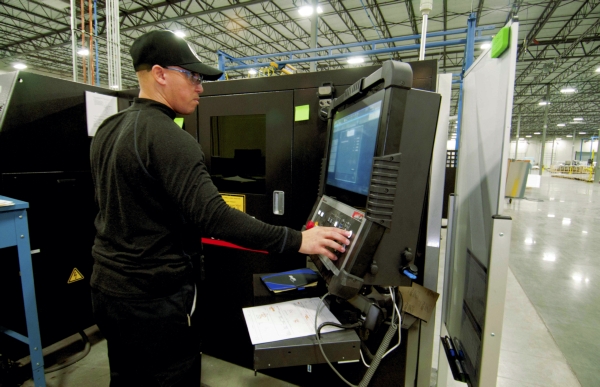 JON C. LAKEY / SALISBURY POST The use of computers and technology allow employees like Jason Sales to operate equipment. Agility Fuel Systems opened a manufacturing facilty to build Compressed Natural Gas fuel cells for tractor trailer engines. The company makes cells that fit behind the tractor cab in an upright position and those that can fit on the side like standard "saddle bag" configurations.

“We thank the Rowan EDC for the continued support and funding to expand our existing Salisbury facility to become the first truly vertically integrated natural gas fuel system manufacturing plant in North America,” Hexagon Agility President Seung Baik said in a news release. “With this expansion, we are proud to create more local jobs and opportunities for our people, and deliver on our vision of clean air everywhere.”

The California-based company, a manufacturer of compressed natural gas fuel systems, will use a $500,000 grant from the state to renovate the building it currently occupies at 1010 Corporate Center Drive in Salisbury. The company plans to add 113,000 square feet to the 204,000-square-foot building to accommodate its expansion.

“Companies of all sizes are finding success in North Carolina’s resilient rural communities,” Cooper said in a news release. “Rural infrastructure grants are helping our communities make improvements to water, sewer and buildings, so they can continue to grow and create good jobs.”

Construction on the expansion will likely begin this summer and be completed early next year. The company, which employs around 200 workers at its Salisbury location, is already hiring for the new positions and will be represented at the Rowan EDC’s job fair at West End Plaza on June 26 from 10 a.m.-2 p.m. The average salary for the positions was not made available.

Additionally, the North Carolina Community College System will partner with Hexagon Agility to provide customized training for the new employees.

Agility Fuel Solutions, Hexagon Agility’s predecessor, initially moved its regional headquarters and production facility into Rowan County in 2015. The company celebrated its five-year anniversary in Salisbury in November with a visit from Baik.

The Rowan County Board of Commissioners in March endorsed the expansion project by approving a tax incentives, which will have Rowan County return 75% of the company’s paid taxes over a five-year period. The taxes are returned as a rebate after the company pays them.

“We are ecstatic that Hexagon Agility has chosen to stay within Rowan County to expand its operations,” County Commissioners Chairman Greg Edds said in a news release. “Hexagon Agility originally selected Rowan less than seven years ago and to make the decision to expand here shows how mutually beneficial this partnership has been. We appreciate their continued investment in our community.”

Salisbury Mayor Karen Alexander in a news release congratulated Hexagon Agility for its “continued success and commitment to expansion of their business.”