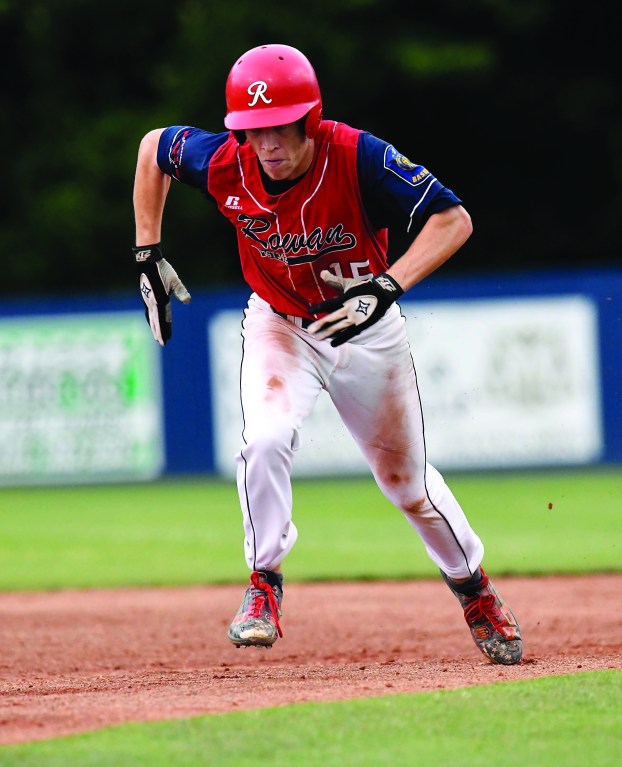 Rowan's Dylan Driver did his damage on the mound Thursday night, allowing just two infield hits and one walk in five innings. File photo by Wayne Hinshaw, for the Salisbury Post

MOCKSVILLE — Dylan Driver handcuffed Mocksville hitters for the second time this season, and Rowan battered Mocksville 9-0 on Thursday to wrap up first place in the Southern Division of Area III.

In the rematch, Driver allowed just two infield hits and one walk in five breezy innings.

Mocksville (5-13, 4-4) turned double plays on hard groundballs by Charlie Klingler and Logan Rogers, or the scoreboard would have looked much worse. Rowan had 15 hits and Mocksville made four errors, so Rowan enjoyed a non-stop parade on the bases.

Klingler had four hits from the lead-off spot. His hot night included a two-run double during Rowan’s five-run third inning.

Tristan Miller (3-for-3) and Austin Fulk (2-for-2, plus two walks) had perfect nights near the bottom of the Rowan lineup.

Klingler singled against Mocksville starter Joe Gaither, stole second and third and scored on a two-out error to begin the scoring in the first.

Mocksville center fielder Trot Byerly threw out  Miller at the plate in the second to keep Mocksville’s deficit at 1-0, but then things got out of hand in the third. Rogers started the inning with a solid double, Driver reached on an infield hit. Peyton Summerall’s two-run single made it 3-0. Miller singled in a run to boost the lead to 4-0 before Klingler’s double made it 6-0.

Winning the division means Rowan will host a playoff game on July 20. That will be the first game of a best-of-three series against the second-place finisher in the Northern Division.

Rowan is back in action tonight at Staton Field against Greensboro. That’s the last home game of the regular season.

Rowan is scheduled to play at High Point — that might be a playoff preview — on Saturday. Rowan plays its final division game when it makes up a rainout at Kannapolis on Sunday.