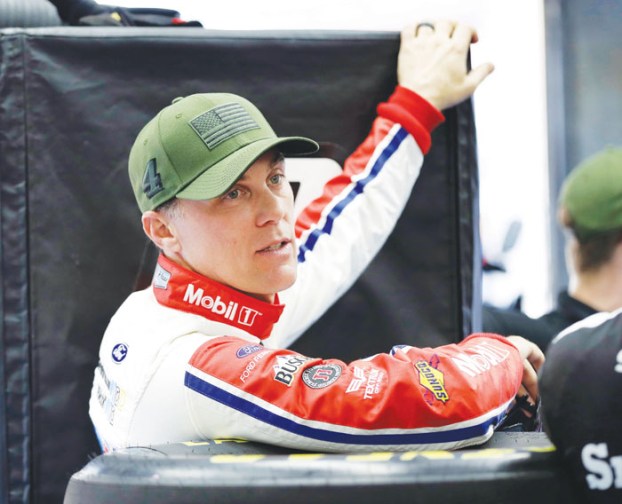 Kevin Harvick says the break doesn’t just benefit the drivers, but all the people associated with the weekly grind of getting a car ready for a different track. (AP File Photo/Chuck Burton)

Kevin Harvick headed into NASCAR’s two-week break during the Olympics delighted to be away from his own race car but with plans to be wrapped up in his young son’s fledgling career behind the wheel.

Joe Gibbs Racing teammates Kyle Busch and Martin Truex Jr. are happy to have the break, too, and a chance to do summer vacation things in the summer rather than the winter, when the sport takes an extended break from racing.

The now half-over, two-week hiatus is something Harvick wishes would become a regular thing.

“I’d rather have a summer break and not have all the breaks at the beginning of the year,” he said of the intermission, which comes with just four races left before the 16-driver playoff field is set — and at the end of a stretch of 14 consecutive weekends of racing.

Another 14-week stretch, beginning the second weekend in August at Watkins Glen, New York, beckons when the racing resumes.

A slow start to the season, Harvick said, seems unnecessary, and the break now doesn’t just benefit the drivers, but all the people associated with the grind of getting a car ready for a different track every week.

“I’d take it off the front end because everybody’s fresh and energized,” he said of moving the break to the summer months. “I think having this two-week break really allows these guys in the shop and on the road to be able to actually have two, for-sure weeks off that they can plan around. That’s something very important to the families of those individuals.”

Harvick, though, wasn’t planning on getting too far away from racing. His plans included attending three races for Keelan, his 9-year-old son. Still, he said, it’s a break.

“I think not having to stress out about what your car did in the last race or what it’s going to do in the next race for a couple of weeks is obviously nice,” the 2014 champion said. Harvick won a series-high nine races last year, but like points leader Denny Hamlin, has only visited Victory Lane this season to congratulate other winning drivers.

The sport might even want to take a page from Formula One, Harvick said, and “shut the shops down –- make it mandatory that nobody can be in the buildings for the first week.”

Count Busch and Truex among fans of the layoff, too. They are among the 13 drivers that have already locked up spots in the title chase, perhaps making it a bit easier to enjoy some time away from the competition.

“Having an off-week is good,” Busch, the series champ in 2015 and 2019, said. “I think it’s about time for us, a good summer break anyways to be able to go out and do things in the summertime that typically you’d always have to wait for the winter time. I can’t tell you how many winter vacations I’ve been on and places that I’ve gone in December, January versus actually being able to go somewhere far away in July.”

Truex, whose three victories have him tied for second after 22 races, one win behind Kyle Larson, said he planned to spend the time away relaxing.

“Chilling, fishing, whatever,” the 2017 series champion said. “Just hanging out.”

UNC’s Howell preseason pick for ACC player of the year