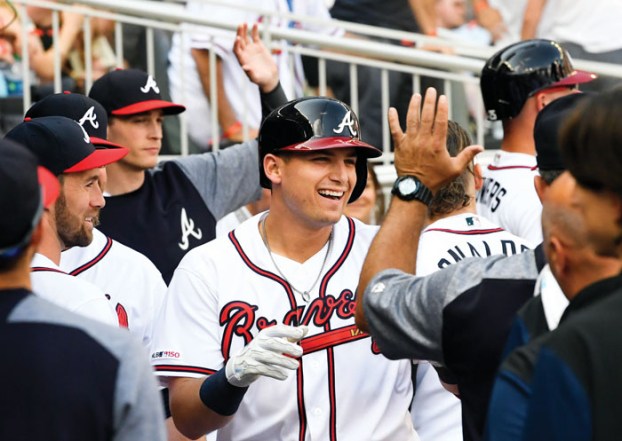 NEW YORK (AP) — Austin Riley hit a grand slam and a two-run homer to set a career high with six RBIs, powering the Atlanta Braves to a 12-5 rout of the New York Mets on Tuesday night.

Ozzie Albies and Abraham Almonte also had two-run homers for the Braves, who have won two of the first three in a five-game series as they chase the first-place Mets in the NL East. Dansby Swanson delivered a two-run double in the first inning to get Atlanta started.

Jeff McNeil and Brandon Drury each hit a two-run homer for the Mets after they trailed 10-1 in the fourth.

Riley’s fourth-inning slam bounced off advertising signage near the left field foul pole and into a small seating overhang. His sixth-inning homer glanced off signage a few dozen feet to the right of his first round-tripper.

The two-homer game was the third of the season and career for Riley, who had two homers May 21 against Pittsburgh and went deep twice again — this time with five RBIs — against the Pirates two days later.

Every starter for the Braves had at least one hit except catcher Stephen Vogt.

Riley’s grand slam punctuated a rough night for Mets spot starter Jerad Eickhoff (0-2), who gave up 10 runs on seven hits and five walks in 3 1/3 innings. Eickhoff became the sixth pitcher in team history to allow 10 earned runs in an outing and the first since Johan Santana on May 2, 2010.

Pete Alonso had an RBI single in the third, McNeil extended his hitting streak to a career-high 14 games and Drury went 3 for 3 after entering in the fourth.

Eickhoff’s rough start came hours after he joined the Mets for the third time this season.

Eickhoff was selected from Triple-A Syracuse on June 20 and posted a 4.50 ERA in two starts before being designated for assignment June 29. He remained with the organization and was called up again from Syracuse on July 11. After two appearances, he was again designated for assignment July 20 and opted for free agency before returning to the Mets.

“I knew we were engaging in conversations again with him,” manager Luis Rojas said Tuesday afternoon. “I learned that we were signing him after the game (Monday).”

Braves: OF Joc Pederson (upset stomach) was scratched from the lineup less than an hour before first pitch. … RHP Huascar Ynoa (broken right hand) threw a simulated game at the Braves’ minor league complex. … C Travis d’Arnaud (left thumb) ran the bases during batting practice and is scheduled to begin a rehab assignment this week.

Mets: RHP Jacob deGrom (right forearm) threw a side session, his second since being placed on the injured list July 18. … RHP Noah Syndergaard (Tommy John surgery) threw a bullpen for the first time since he was diagnosed with right elbow inflammation following a rehab start May 25. … RHP Carlos Carrasco (right hamstring) is expected to make his Mets debut Friday.

Mets: Rookie RHP Tylor Megill (1-0, 2.10) has allowed one run or fewer four times in six outings, tied with Jim McAndrew (1968) for the most by a pitcher through his first six starts for the Mets.