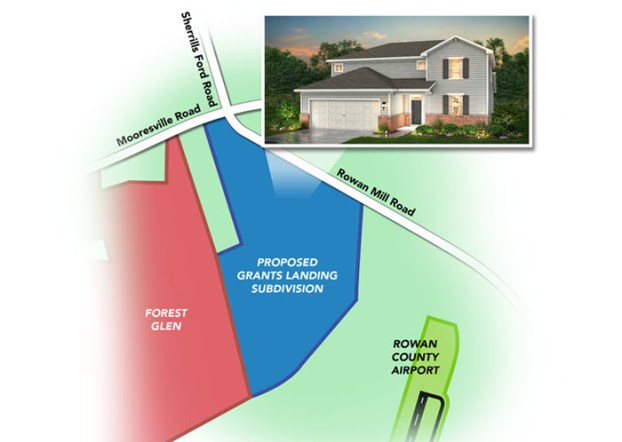 SALISBURY —  The City Council will meet Tuesday and consider a 230-home development on Rowan Mill Road near Grants Creek approved by the Planning Board last month.

The meeting will start at 3 p.m. to make time for those wishing to attend the National Night Out events scheduled across the county later Tuesday. Those who wish to speak via Zoom during the public comment section must sign up by 2 p.m. by contacting City Clerk Kelly Baker at kbake@salisburync.gov or 704-638-5233. Those who wish to speak in person can sign up in Council Chambers before the meeting begins.

Justin Mueller of Sherwood Development Group is working with Bloc Design to develop a subdivision of 236 single-family homes near the existing subdivision of Forest Glen. The development, called “Grants Landing,” would sit on 137 acres near the corner of Mooresville and Rowan Mill roads. Grants Creek runs along the back perimeter of the proposed development.

The developer is requesting the rezoning of three parcels currently on the property from rural residential to general residential, or GR-3, with a new conditional district overlay. With overlays, developments are approved with conditions that must be met, typically to appease nearby residents and ensure minimal impact.

Developers are currently working with the city to voluntarily annex nearly 78 acres of the property into the city’s limits. Development Services Manager Teresa Barringer said during the July 13 meeting the subdivision is not within the city’s public transit route.

The project is estimated to require $58.5 million in investment. Joe Untz of Sherwood Development Group told Planning Board members construction may begin as early as next summer, but it’s more likely to begin later given the challenges with building supplies. He estimates homes would measure between 1,800 and 2,400 square feet, with the cost for each expected in the $200,000s to upper $300,000s.

The development’s plan proposes sidewalks on both sides of streets and the addition of street lights and public street trees. Each lot measures 55 by 100 feet. A little more than 5 acres would be dedicated to recreational open space. Entrances and exits from the subdivision would be located on Rowan Mill Road. Additionally, two retention ponds would be on the property to mitigate stormwater.

Among the concerns at the July 13 meeting was sufficient buffer from vegetation. Sherwood Development is working with the Forest Glen Homeowners Association to finalize an agreement for the natural buffer along the perimeter of Grants Landing. George Simons, president of the Forest Glen Homeowners Association, said at the Planning Board meeting that he estimates it would cost Sherwood Development around $50,000 to add vegetation to the existing foliage and natural buffer.

Following City Council approval, construction of the subdivision can begin.

• Council members will consider an ordinance amendment for the 2021-22 budget in the amount of $8,000 to appropriate a grant to assist with trail design at Salisbury Community Park.

• Council members will consider authorizing City Engineer Wendy Brindle to extend reimbursement agreements with the North Carolina Department of Transportation regarding the maintenance of signs, markings and markers, traffic signals and the computerized traffic signal system until June 30.

• Mayor Karen Alexander will declare Aug. 3 “National Night Out.” She will also announce that the virtual Mayor’s Spirit Luncheon will be held Aug. 9 from noon until 1 p.m. via the city’s Facebook page. This year, the forum will highlight the “luminaries” of Salisbury and Rowan County who were “the guiding lights for our residents during the pandemic.”

By Natalie Anderson natalie.anderson@salisburypost.com SALISBURY — A Kannapolis man was arrested Friday for 15 felony counts of second- and third-degree... read more