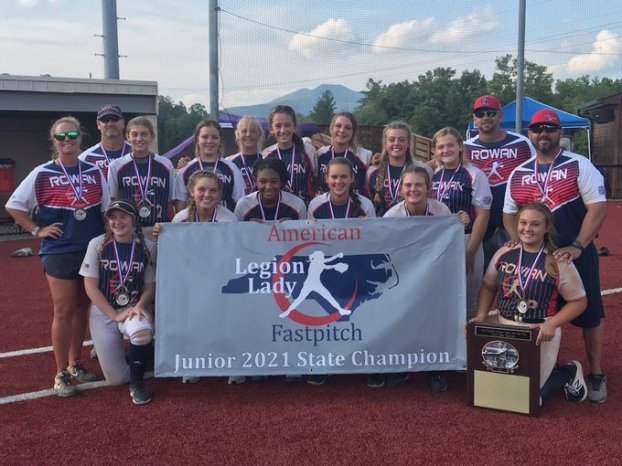 MARION — It was a long Sunday for Rowan County’s Junior Legion Lady softball team, but they’ll remember it for the rest of their lives.

They won four games in one day, coming back through the losers bracket to win the state championship.

Rowan split its first two games in the tournament on Saturday, beating South Wake and losing to Cleveland County, so it had to start play on Sunday at 9:30 a.m.

Rowan survived 3-2 in the matinee against McDowell County, with Collins providing a walk-off hit that scored Gracianna Barber.

Rowan then won another walk-off game, beating South Wake for the second time on a hit by Danica Krieg that scored Collins.

Then Rowan romped against Wayne County 13-1 to advance to the championship game, a rematch against Cleveland County.

Rowan went 11-1 in the regular season in Area III. The Lady Legion concept got started in 2017.

There were nine Senior Lady Legion teams in Area III this season, but only four Junior teams. Rowan finished on top in a league that included Davidson County, Alamance County and East Forsyth.

Rowan finished the season with an 18-2 record.

Opening ceremonies were held on Monday for the Senior tournament being hosted by Crest High in Boiling Springs.