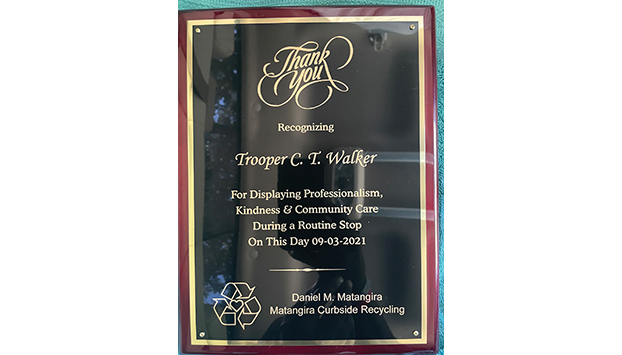 This is the plaque Matangira asked Trophy House in Salisbury to make so he could present it to Trooper C.T. Walker.

Update: Following publication of this article, Matangira was able to schedule a plaque presentation with Trooper C.T. Walker for Wednesday.

Law enforcement officers don’t usually receive plaques after making traffic stops, but businessman Daniel Matangira is hoping to do exactly that for Trooper C.T. Walker of the N.C. Highway Patrol.

Grateful for the way Walker did his job, Matangira asked Trophy House to make a plaque thanking the state trooper “for displaying professionalism, kindness and community care during a routine stop” on Friday. Matangira is working to contact the Highway Patrol’s offices in Rowan County to present Walker with the plaque and the Salisbury Post might make a connection, too.

Thinking about social movements in the previous years and other stressors associated with work, Matangira’s nerves were tense. He’s doing jobs personally because of a shortage of workers. That means missing out on meetings and activities he enjoys, including serving on the board of North Hills Christian School and being active with the Rowan County Chamber of Commerce. Matangira is also a Black man. He was replaying images in his head of police interactions that have made national headlines.

“There were a lot of things going through my mind just with the traffic stop,” he said. “You can’t help but associated the climate of the past two years and the divisiveness.”

It’s what happened in between the stop and its end that disarmed Matangira. Because the N.C. Highway Patrol’s troopers “don’t just stop you to wish you a nice day,” Matangira was expecting a ticket.

“And I would never have resisted it,” he said. “The man doesn’t have to give you a pass.”

Instead, Walker told Matangira his truck’s registration expired days earlier — at the end of August — and let him go. The trooper also allowed Matangira to pick up a bin and wait for him.

“There was a lot of humanity and respect that came with him, and that stop was just saying to me, ‘Daniel, get your guard down,’ ” Matangira told the Post. “Law enforcement is going to protect you. … It was almost like he needed my permission, really, to go through my truck.”

The businessman’s message to the public is that law enforcement officers are human beings, too, and are facing some of the same stressors as the people who are the subject of traffic stops.

“They’re living in the same environment,” Matangira said. “They’re your friends and neighbors. They’re suffering from the same perceptions that we are thinking about, but we are all in this together.”

After the stop, Matangira finished the job he was working on beforehand and headed straight to the license plate office to renew the vehicle’s registration. Just hours after the traffic stop, he picked up the completed plaque from the Trophy House in Salisbury and is holding onto it until he can present it to Trooper Walker.

If there are any highway patrolmen reading this, Matangira’s email is dmatangira@hotmail.com. The phone number for Matangira Curbside Recycling is 704-603-4355.

“Wendell was such a humble and forgiving person. I have not been able to accept his death. It still weighs... read more