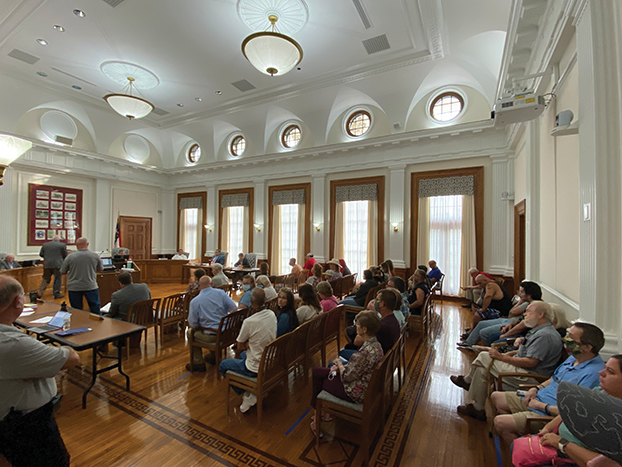 The latest hearing regarding Reaper's Realm Haunted House was well attended once again. The Rowan County Board of Commissioners ultimately denied both a rezoning request and temporary use permit from Tony Jenkins, the owner of the haunt. The decisisions will effectively prevent the attraction from opening this season unless there is an appeal. Ben Stansell/Salisbury Post

SALISBURY — The Rowan County Board of Commissioners on Tuesday night denied a temporary use permit for Reaper’s Realm Haunted House and Trail, effectively preventing the controversial Halloween attraction from operating this season.

“The bottom line for me is this has become too much,” Chairman Greg Edds said. “We’re being asked to ignore too much in order to give you the benefit of the doubt to provide you another temporary permit.”

Tony Jenkins, who owns and operates Reaper’s Realm with his family, has been running the haunt in the China Grove area for over a decade, but he obtained his first temporary use permit in 2017. The permit lasted for two years, but Jenkins failed to get approval for another permit once it expired. The county might not have realized that Reaper’s Realm was operating unpermitted if not for a shooting at the property in September of last year.

While commissioners granted Jenkins a temporary use permit after the shooting so he could continue to operate for the remainder of last Halloween season, they encouraged him to seek more permanent rezoning. At their behest, Jenkins applied for a conditional district rezoning from “rural agricultural” to “commercial, business, industrial.”

The rezoning request, met with impassioned opposition from Jenkins’ neighbors, was recommended for denial by the Rowan County Planning Board in July. It was slated to meet a similar fate at a marathon Board of Commissioners meeting last month, but the board tabled the matter and advised Jenkins to seek a temporary use permit to operate this year.

Jenkins did not withdraw the conditional district rezoning application, which was denied unanimously without much fanfare earlier Tuesday afternoon. By the time commissioners were scheduled to consider the new temporary use permit at 6 p.m., the J. Newton Cohen Sr. room on the second floor of the Rowan County Administration building was filled with concerned citizens representing both sides of the matter.

Each side was given 10 minutes to comment on the temporary use permit, which included conditions ranging from security requirements to noise limits. Al Benshoff, who Jenkins obtained for legal counsel, took most of the allotted time to argue that his client’s application met the necessary conditions and would not be a risk to safety or cause a negative impact on neighbors. The last two minutes were used by Jenkins to make a plea for the future of his business.

Jenkins argued that Reaper’s Realm had no issues with safety prior to the shooting. He also made it clear during the meeting that this would be the last time he would seek a temporary use permit.

“We will never apply for another temporary use permit at that property because we will not be there after this year,” Jenkins said. “Our property will be sold as of Nov. 1.”

The 10 minutes reserved to those opposed to the permit were used by Richard Yeoman, a Mooresville-based attorney who was hired by about a dozen of Jenkins’ neighbors. Yeoman’s argument hinged on past compliance issues the county has had with the property.

“The best evidence of what we can expect from any conditions that the board would place on Reaper’s Realm today is what’s been done in the past,” Yeoman said. “And what we’ve seen in the past is just blatant disregard for the conditions and the directives provided by this board.”

Yeoman pointed to the fact that Jenkins operated without a permit for seven out of 10 seasons and said Jenkins broke several conditions of previous temporary use permits by operating past midnight, opening the haunt on Valentine’s Day and St. Patrick’s Day and selling alcohol on site.

Echoing the same concerns brought forth by neighbors in the past, Yeoman also called Reaper’s Realm “a large commercial enterprise” that generates noise, trash and results in property damage and trespassing.

The past compliance transgressions and other concerns from neighbors appeared to have swayed the board against approving the temporary use permit.

While providing his logic for denying the application, Commissioner Mike Caskey took issue with the fact that all but one of the buildings on the property are currently unpermitted by the county.

“There’s too many questions to approve it,” Caskey said.

Commissioner Judy Klusman seconded those concerns and said safety was the primary reason why she voted to deny the permit.

Vice Chair Jim Greene was the only commissioner who voted against denying the permit.

“He’s been doing this for 10 years,” Greene said. “He did have one incident there that was not of his making. Nothing collapsed, nobody tripped inside. I just really wish we could work out a way to let him operate (this year), close down and move, which is what he has indicated he’s going to do.”

After the decision was made and the meeting was adjourned, people from both sides of the argument began to exchange heated words on their way out of the room. Talking to one person who was in opposition to the permit request, Jenkins said, “you just took food off my kids’ table.”

Although both the temporary use permit application and conditional district rezoning request were denied, Jenkins could appeal  either of the decisions to the Rowan County Superior Court.