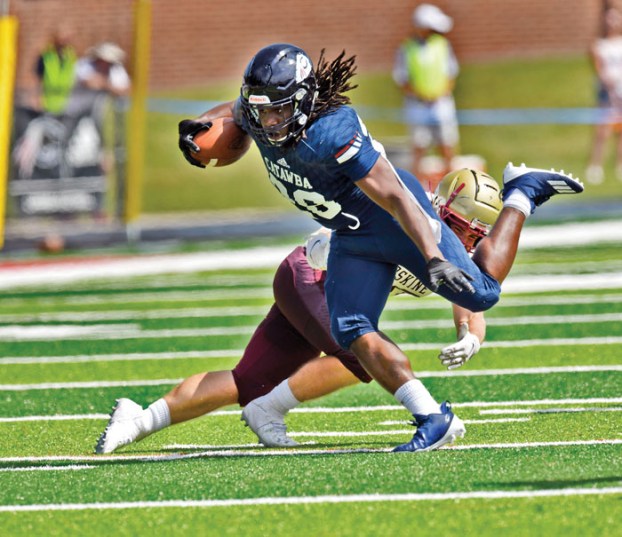 SALISBURY — Catawba’s defense spent most of Saturday night bending, but not breaking.

Finally defensive lineman Mike Jones made the play that broke the backs of the visitors.

Catawba led 21-6 with 12 minutes remaining, but Winston-Salem State was perched at the Catawba 18-yard-line, first and 10. That’s when Jones, a 260-pound freshman from Georgia, made it a very secure lead with his pick-six, a 77-yard stampede to the end zone.

Catawba prevailed 28-6 on Kirkland Field at Shuford Stadium. The Indians limited the Rams to a pair of first-half field goals and improved to 2-0.

Catawba didn’t light it up offensively, but was efficient. The Indians banged out 186 rushing yards on 44 attempts. Daniel Parker led a committee of backs with 11 carries for 68 yards. Ken Avent completed 10 of 12 passes for 117 yards. Catawba had one turnover on a fumble.

Clayton Crile had another big night on special teams, including a 71-yard punt that pinned WSSU back on its 3-yard line.

The visitors had 110 rushing yards and 127 passing yards.

Winston-Salem State (0-1) put together two solid drives in the first half, but had to settle for field goals, while Catawba was getting touchdowns.

Freshman Jyrea Martin capped a 78-yard drive on Catawba’s first possession with a 3-yard scoring run. Martin scored from the 4 in the second quarter to finish off a 77-yard push. That TD led to a 14-6 halftime lead.

It was a defensive-minded third quarter, but Catawba made it 21-6 in the final minute of the period on Avent’s 10-yard pass to Kujuan Pryor.

Then the pick-six early in the fourth quarter shut the door on the Rams, who were hurt by 11 penalties for 82 yards.

Catawba hammered the last seven minutes off the clock in a bruising drive that netted no points, but lots of satisfaction for the offensive line and the coaching staff.

Catawba is home against Barton (and former Catawba coach Chip Hester) next Saturday at 1 p.m.