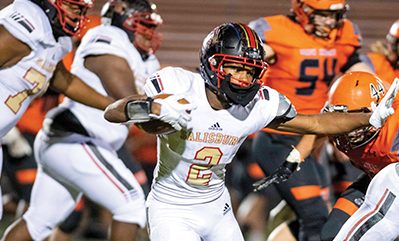 SALISBURY — Thomasville at Salisbury is a matchup rich in history and tradition, and Friday’s contest between 3-0 squads is expected to add to it.

North Rowan certainly looks dangerous, but whoever wins Thomasville-Salisbury becomes the team to beat in the 1A/2A Central Carolina Conference.

While Salisbury has been super in the state playoffs the past two seasons, it didn’t win any league titles in the previous version of the CCC, which included North Davidson and Oak Grove, among others. A win tonight would be a huge step in taking care of a void in the trophy case.

Ranked second in 2A this week by MaxPreps, Salisbury is still unscored on and has running-clocked Polk County, East Rowan and South Rowan.

Realistically, this will be Salisbury’s only serious test in the CCC before the Hornets host North Rowan in the regular-season finale.

“It’s definitely a different league this year,” Hinson said. “That’s both a blessing and a curse.”

Salisbury began the process of honoring coaching legends of Boyden, J.C. Price and Salisbury teams with 11 inductions in 2012.

Joe Pinyan and Dale Snyder will be honored as coaching legends on Friday.

Pinyan is remembered for coaching the Hornets’ 2010 2AA state champions, but he actually had a 10-year run of terrific teams that posted 100 victories. His 2009 and 2012 teams were Western Regional runner-ups, with both teams one play away from making the state title game.

Pinyan’s Salisbury teams lost 36 times, although that’s somewhat misleading. His 2008 team, one of his strongest squads, forfeited four games that it won on the field.

He also poured his heart into jayvee contests. His Salisbury jayvee teams were 80-20.

He served on the Shrine Bowl staff in 2007 and was a winning head coach in the 2011 East-West All-Star Game.

As Salisbury’s AD from 2005-13,  he was the administrator for 21 state championships. Besides the football state title, there were seven in girls tennis, four in girls basketball, four in girls golf, two in boys track and a field, two in boys golf and one in boys soccer.

In 2010-2011, Salisbury received the Exemplary School Award from the NCHSAA for overall athletic excellence.

Snyder coached boys and girls girls at Salisbury for 13 years.

As Salisbury’s AD, he administrated six state titles and 39 conference championships.
He’s a founding member of the  NC High School Golf Coaches Association and serves as a director of NCHSAA state golf championships.
•••

Thomasville’s three victims were lightly regarded, and this also will be Salisbury’s first game against a team ranked in the state’s top 100. Thomasville is ranked 99th.

Forbush got shut out but had 200-plus rushing yards against Thomasville last week. That’s encouraging for the Hornets.

Salisbury QB Mike Geter has a county-leading eight rushing TDs, but other than that, the Hornets don’t have crazy offensive numbers. That’s partly because they’re usually starting their drives on the opponent’s side of the 50 and partly because the starters haven’t had to play much past halftime.

Salisbury can score at any time. The Hornets hit East Rowan with two defensive TDs and produced three special-teams TDs against South Rowan.

Salisbury flatted the Bulldogs 28-0 in 2019 and has won the last three meetings.

Thomasville’s most recent victory was in 2016.

It’s appropriate that Pinyan will be at Ludwig Stadium tonight as his teams had a series of battles against Thomasville.

North should have an easy time in its Central Carolina Conference opener and young QB Jeremiah Alford, back Jae’mias Morrow and receiver Amari McArthur should put up some numbers. Alford has 650 passing yards in his first three games.

North has won all eight previous meetings with South Davidson, and it’s usually been in the 49-0 range.

In 2012, North set school records for points and scoring margin in a 74-0 rout of South Davidson.

South Davidson hasn’t mustered much offense so far, but the Wildcats have turned in two respectable losses, including a 21-16 setback to South Stanly last week.

Now this is an interesting game.

The South Piedmont Conference doesn’t appear to have a dominant team, so West Rowan and Carson might be as good as anyone.

Carson has a completely different approach to offensive football and has completed a total of three passes in three games.

That doesn’t mean the Cougars can’t move the ball. QB Hunter Burris is second in the county with 334 rushing yards and directs a disciplined option attack that will force the fly-to-the-ball Falcons to play assignment football. Carter Dowd has five rushing TDs.

Carson’s defense played well for the most part in a 22-10 loss to Robinson last week, while the Falcons had some defensive issues while outscoring North Rowan 42-35.

West has dominated the all-time series to the tune of 15-1.

West has won eight straight in the series since the Cougars’ stunning home victory in 2013. West outscored the Cougars 48-28 in Mount Ulla in the spring.

After seeing ferocious Robinson and Salisbury defenses the last two weeks, the Raiders will be glad to face a normal team and may be able to get the offense moving.

South has been banged up some, and standout safety Gabe Pozyck missed the Salisbury game.

South’s most recent victory in the series came in 2014.

East’s offense is constructed around the short passing game, and the Mustangs have struggled to make it work so far. QB Aiden Schenck made some accurate throws last week, but the Mustangs were plagued by drops. East didn’t get on the board against North Davidson until the final minute, and that was with the aid of two 15-yard penalties.

East also lost to North Stanly and was blown out by Salisbury.

Concord was shut down by Robinson and also lost to the Cabarrus Warriors, a combined Cannon School/Concord Academy team.

The last East-Concord meeting was a 39-20 home win for the Spiders in 2016. The Spiders have won the last eight meetings, including the controversial 2011 playoff game in Concord.

There’s a chance these are the two best teams in the Greater Metro Conference.

Hickory Ridge is definitely the favorite. The Bulls are a top-25 team according to MaxPreps, while A.L. Brown is ranked 50th in the state.

The Wonders are undefeated, having taken care of North Meck, Sun Valley and Rocky River, but none of those three are ranked in the top 100 by MaxPreps.

Hickory Ridge’s losses were very competitive ones to 18th-ranked Charlotte Catholic and to Julius Chambers (formerly Vance), which is ranked No. 1 in the state by MaxPreps.

Hickory Ridge has been balanced offensively. QB Alex Bentley had thrown for 747 yards and 10 TDs, with only two interceptions against high-level competition.

The Wonders, who did not play last week, have gotten five TDs from Jaden Johnson and Xavier Chambers and five TD passes from Joey Vanover.

A.L. Brown leads the all-time series 6-1. Most of the excitement occurred in 2012, the last time the programs met. They played twice that year, with the Bulls winning  63-42 in the regular season and the Wonders avenging that loss 69-55 in the state playoffs.

RJR’s most recent win in the series came in a more defensive-minded outing in 2018.

Offensively, at least, Davie, ranked 13th in the state by MaxPreps, is a monster.

QB Alex Summers is having a season that will have people writing songs about him. He’s thrown for 972 yards in three games, with 11 touchdowns and no interceptions.

Wake Forest commit Tate Carney has put the ball in the end zone 10 times, and the War Eagles have three different wideouts with more than 200 receiving yards.

Defensively, the jury is still out. Davie has allowed 92 points to West Rowan, Lake Norman and Mooresville.

Reynolds shut down High Point Central on opening night before losing to Northwest Guilford and Southwest Guilford, a pair of 2-1 teams.