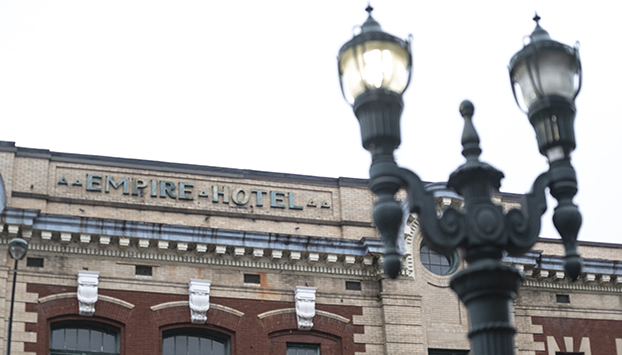 Josh Bergeron / Salisbury Post - A light pole in front of the Empire Hotel on South Main Street in Salisbury. The city of Salisbury and Downtown Salisbury Inc. have reached a deal with a Charlotte-based developer for the property.

SALISBURY — A year after forming a committee to make a selection, the Empire Hotel Redevelopment Task Force on Tuesday announced the selection of a Charlotte-based developer to redesign the hotel with a luxury boutique feel.

In September 2020, the city ended exclusive negotiations with Black Point Investments for the Empire Hotel project, which had been ongoing since 2016, after the firm did not agree to a $700,000 purchase price from the city. Downtown Salisbury Inc., which owns the property where the hotel is located, then formed a task force of nearly a dozen local residents and stakeholders. The task force launched a request for proposals in September 2020 and has since “engaged in an extensive and thorough evaluation process” to find a project design that is the “most economically viable” option for downtown Salisbury, according to a news release from Downtown Salisbury Inc.

The selected developer, Brett Krueger, has more than 25 years of experience in construction and residential and commercial development. He served as the vice president of operations for MRK Investments, where he conceptualized and led the development of the nationally recognized hotels Windsor Boutique Hotel in Asheville and The Ivey’s Hotel in Charlotte.

Krueger and his affiliate, Howard Kosofsky, have proposed constructing around 40 apartments in the hotel, ranging from one to three bedrooms. The plan would also include a full-service spa, gym and health club in addition to 7,000 square feet of retail space and 6,000 square feet for a restaurant and historic hotel bar. The design is a “blend of boutique and antique designs where the past meets modern convenience,” DSI said in its news release.

Krueger also intends to have retail space that supports and directly benefits artists and artistic growth. He wants to restore more than 20 hotel rooms in the hotel as well as the ballroom for event space.

Krueger told the Post on Tuesday that he was “humbled, thrilled and absolutely ecstatic” about the decision. His intention is to create a “living representation of Salisbury’s past, present and future.”

Krueger has already scheduled meetings with some local architects and contractors and created an email address for Salisbury-area residents to contact him with any information or stories they have about the Empire Hotel. Krueger can be contacted at brettkrdevelopments@gmail.com.

“I just would like to talk to so many people about what the building has meant to them, their families and the city,” Krueger said. “And I’m after any pieces of history if people are willing to donate, even on a loan.”

The task force’s selection comes after months of deliberating over two final proposals. The other proposal came from Josh Barnhardt of Iron Horse Development, who joined forces with Bill Greene of G2 Development, LLC and Justin Mueller of Sherwood Development Group to tackle different sections of the hotel in hopes of expediting its completion. Though both design proposals were similar and included a blend of residential and retail space, Barnhardt’s proposal included “row homes,” which look like walk-up townhomes seen in other historic locations as well as an additional apartment on the top floor. “Row homes” originated in Europe in the 16th century and include a row of attached dwellings sharing side walls.

Barnhardt and his team’s concept also included the design of some Airbnb rentals, a grocery store for downtown residents and a distillery.

“Our downtown is the signature of our community and an economic generator,” Alexander said. “We look forward to taking the next steps with the chosen developer and his assembled team to make his vision a reality in downtown Salisbury.”

DSI, Krueger and the city are expected to enter into a preliminary development agreement to define any remaining issues before a final decision or sale.

The hotel’s location is in an opportunity zone and it has been listed on the National Register of Historic Places as part of the Salisbury Historic District. It is listed as a local historic landmark and is eligible for historic tax credits.

Whitney Wallace Williams, chair of the task force, said the decision was not an easy one.

“The Empire is a beast of a project but one that has the potential and capacity to transform our downtown and the Rowan County experience for decades to come,” Williams said. “I express my gratitude to all developers for their excellent submissions, particularly developers local to our community. I commend the Empire Hotel Redevelopment Task Force members for their objectivity, expertise, collaboration and passion devoted to this critical piece of Salisbury’s downtown and future.”

DSI Board Chair Gianni Moscardini said the team has “looked at this project from 20,000 feet elevation to evaluate the present and future economic and historic impact.”

Editor’s Note: A previous version of this story referenced task force member and former educator Janine Evans as “Janine Evans-Davis,” which is not her legal name. The Post regrets this error.

SALISBURY — The Rowan County Board of Commissioners on Monday night approved a tax incentive agreement for a major development... read more