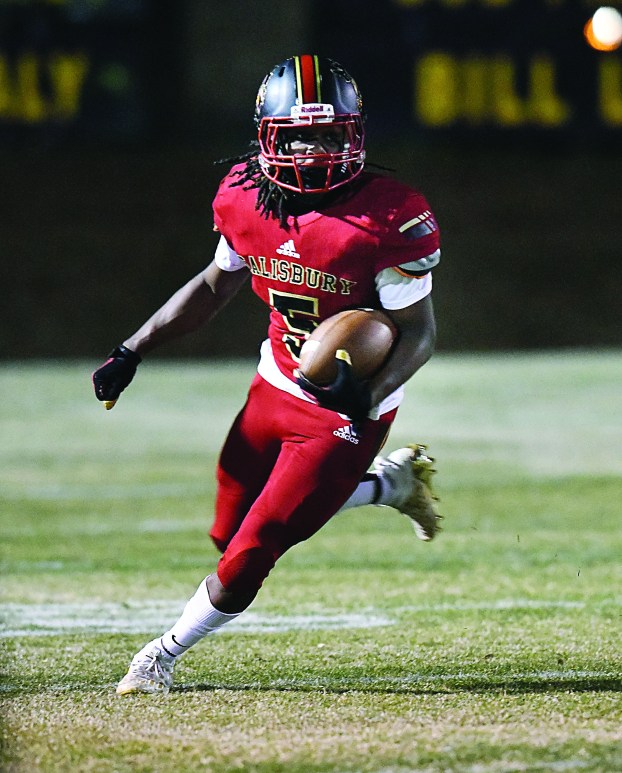 Speed is the key for Salisbury‘s Jayden Gibson, who sees plenty of action as a receiver, defensive back and return man. File photo by Wayne Hinshaw, for the Salisbury Post

SALISBURY — Size is cool and speed is cooler, but universal versatility is the ingredient that makes Salisbury’s unbeaten football team really special.

Among the most versatile guys on a team as flexible as a yoga instructor is Jayden Gibson, who goes quietly about his business each week as he prepares for multiple roles on offense, defense and special teams.

There was a touchdown catch against Polk County.

There was a pick-six against East Rowan.

There was a return of the opening kickoff for a touchdown to jump-start the romp against South Rowan.

Gibson actually did play a little running back in the opener against Polk County, but mostly he’s a receiver, defensive back and return man. His time at DB isn’t necessarily at one position. He’s comfortable at cornerback or safety.

“Last year I started out as a safety but I was able to switch to corner at midseason,” Gibson said. “Whatever it takes.”

Speed will play just about anywhere, and Gibson has it. His PR is 11.4 in the 100 meters. North Rowan’s Amari McArthur nipped him in the 100 in the Rowan County Championships last spring, but it was tight. Both were clocked in 11.64 seconds.

“It’s amazing how fast Amari can run for such a tall guy,” Gibson said. “I like track and I’ve been in track meets since I was 7 years old. I’ve always been one of the fastest people in my school.”

Gibson is from an athletic family.

Big brother Eric Gibson played for Salisbury and North Rowan and was a solid linebacker for Catawba. Jayden’s twin sister, Jaleiah, who is a minute older, is one of the standouts for Salisbury’s girls basketball team. She’s not a huge scorer, but her defense and rebounding have helped make the Hornets one of the top-tier programs in 2A. Her role on the basketball team is a lot like her brother’s on the football team. She does whatever is needed to win.

“I think Jayden is one of those guys on our team who doesn’t get a lot of attention, but he’s a very good player,” Hinson said. “He was one of our standouts in the (49-21) win against Thomasville. They’re a running team, but he got in there and made five tackles, one of them a touchdown-saver. He was steady at wideout, did a good job of blocking on the perimeter.”

Thomasville is talented, but not as deep as Salisbury. The Bulldogs actually led 8-7 at one point, but then it was 42-8 after Salisbury unleashed a combined whirlwind of offense, defense and special teams.

“We went into the game believing it would be a challenge, and it really was,” Gibson said. “Thomasville was good. It was back and forth there for a while, but then they got tired.”

There’s no doubt about Gibson’s favorite play of the season. That was the kickoff return to get things started against South Rowan.

“I felt really good going into that game, and then I saw the kickoff coming toward me,” Gibson said. “I was going to try to run up and catch it, but then I let it bounce. The thing is it took a terrible bounce. I had to go over and pick the ball up, but then I took off and everybody was blocking. Deuce Walker made a great block for me and I took it 90 yards.”

The pick-six was also fun. He saw it coming with the quarterback under duress, and once he had the ball in his hands, it felt like he was running alone through a tunnel.

Salisbury, ranked second in the 2A West by MaxPreps and 24th in the state, had pitched shutouts in its first three games.

“We had a great defense last year, lost good players, and still have a great defense,” Gibson said. “We’ve got some beasts. I think we’re at least as good as last year and we’re probably even closer. We have fun hanging out together off the field. A lot of our families are very close friends.”

The new-look Central Carolina Conference isn’t the perilous minefield it was in recent seasons, and it’s certainly possible Salisbury won’t be faced with another serious confrontation until it concludes the regular season against North Rowan.

Gibson, who hopes to compete in track and/or football in college, understands what that means. The Hornets (4-0) have to find ways to stay sharp,  even if they go a month without seeing a team in the top 200.

“We’ll keep working and practicing hard,” Gibson said. “We need to get better every day.”