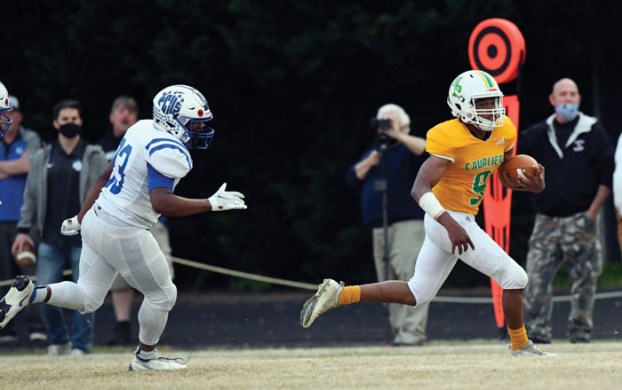 North’s Jae’mias Morrow has been able to run away from defenders all season and leads the county in rushing yards with 508 in four games. He has seven rushing TDs also. File photo by Wayne Hinshaw, for the Salisbury Post

SALISBURY —  West Rowan head coach Louis Kraft believes this football season could be a repeat of 2019 when West, North Rowan and Salisbury all were still playing on the Friday after  Thanksgiving.

Salisbury, you know about. It will be a shock if the Hornets don’t make a serious playoff run.

West Rowan turned in its most complete game of the season in the 49-14 win against Carson last week, and while the Falcons weren’t perfect, they ran it, threw it and defended and were generally dominant. They’ve established themselves as the early favorite in the South Piedmont Conference race, although Concord looked good last week in demolishing East Rowan, and you never know about Central Cabarrus.

Kraft was impressed with North Rowan when the Falcons escaped 42-35 in Spencer after leading 21-0.

Which brings us to the most intriguing game involving a Rowan team this week. That’s North Rowan’s trip to take on Thomasville at historic Cushwa Stadium, where the Cavaliers and Bulldogs have tangled in some headknockers.

Playing in a split 1A/2A league, these are the two contenders for the best record among the Central Carolina Conference’s three 1A teams, so it’s a significant game with playoff implications.

The lone “county” game this week involves Kraft’s Falcons against South Rowan. West’s winning streak against the Raiders is a long one. It’s not likely to be ended Friday.

East Rowan has struggled on both sides of the ball, but the Mustangs should be able to compete with Northwest Cabarrus on the road. The Trojans had to hang on against South Rowan last week. East-Northwest is the local radio game on WSAT.

As good as Salisbury is, the next four weeks — West Davidson, South Davidson, East Davidson and Lexington — may be short on excitement. East Davidson is ranked 239th in the state by MaxPreps, and they’re the bullies of that quartet.

In the 4A ranks, Davie will try to keep it going against East Forsyth, the stoutest team it has faced to this point, while A.L. Brown tries to turn it around at home after taking a beating last week at Hickory Ridge. The Wonders weren’t favored in that one, but it’s not like anyone expected them to be down 36-0 after a quarter.

Carson is off this week and will return to action at home against Concord on Oct. 1. Carson also announced this week that it will host East Rowan on Senior Night on Wednesday, Oct. 13. That’s because Oct. 14 has been designated by Rowan-Salisbury Schools as a Wellness Work Day.

The Cavaliers and Bulldogs get together on a football field for the first time since 2016. North won that one, 33-14, avenging a loss to Thomasville in 2015.

Thomasville QB CJ Dickerson left the Salisbury game with an apparent injury, so a lot will depend on whether he can go or not. If he’s in there, the Cavaliers are in for a fight. Thomasville running back Jabrii Carolina is the other offensive stud for the Bulldogs.

North has some of the county’s best players. Jae’mias Morrow leads the county in rushing yards with 508 in four games. His seven rushing TDs rank second in the county.

North receiver Amari McArthur has scored at least one TD in every game, while freshman quarterback Jeremiah Alford is tied for the county lead with nine TD passes and also has run for a touchdown in every game.

North’s defense scored twice last week in the romp over South Davidson, and coach Nygel Pearson will look for another big effort out of that crew.

West Davidson, coached by former South Rowan lineman Brian Billings, always plays hard, but the Green Dragons lost to Central Davidson 62-0 and Southwestern Randolph 57-10, so this appears to be a mismatch of epic proportions.

West Davidson has had two weeks to prepare for it, but it only takes two minutes to see the talent that the Hornets bring to the field.

Salisbury’s sophomore QB Mike Geter gets better every week, showed he could throw an accurate deep ball last Friday, and now has accounted for 17 touchdowns — 11 rushing, six passing. He has single-digit pass attempts every week, but his efficiency has been breath-taking. He had 228 passing yards last week on five completions.

JyMikaah Wells is third in the county in rushing yards, but he got rolling last week against the best team Salisbury has faced and might be the county leader when all is said and done. He can truck you or juke you, but he prefers being an 18-wheeler.

Defensively, Salisbury is even scarier than it is offensively, and all the Green Dragons deserve a steak dinner if they can score against the first-stringers.

West has a dynamic passing combination in quarterback Noah Loeblein and receiver Peter Williams-Simpson. Williams-Simpson has caught seven of Loeblein’s nine TD passes, so the Raiders have to figure out a way to deal with him. He’s 6-foot-2 and he can motor.

West’s running game has been competent, and the defense is coming off its best performance of the season in a lockdown of Carson’s running game.

South bounced back from a thrashing from Salisbury and gave Northwest Cabarrus a serious scare last week, losing 25-20 after spotting the Trojans a three-TD lead.

South welcomed safety Gabe Pozyck back from injury last week and he was impactful with seven tackles, an interception and big kickoff returns.

Aquiles Bernal has three sacks and will try to put some heat on Loeblein.

South has fumbled a lot. The Raiders will have to win the turnover battle to stay in the game with West.

This is the WSAT radio game for this week.

The series has been well-contested with the Trojans leading 19-17.

East, ranked 49th out of the 55 3A West teams by MaxPreps, has struggled mightily on offense, making few explosive plays and managing just two TDs (both rushing) in four outings. That’s put a lot of pressure on the defense.

The Mustangs were not overly competitive last week with Concord, which was kneeling late in the game in the red zone. It easily could’ve been 43-0 instead of 36-0, as the Spiders were  barreling for 8 or 10 yards on every snap and amassed 450 rushing yards.

Still, Northwest’s 25-20 escape at South Rowan has to be encouraging to the Mustangs, and maybe they’ll put it together tonight and spring an upset.

Northwest started the season 0-3, but has won its last two. Northwest’s sophomore QB Alex Walker has thrown 10 TD passes. He also has tossed five interceptions, so maybe the Mustangs can pick off a few.

Northwest won the last meeting, routing the Mustangs 42-7 in Granite Quarry in 2018, but East fans will fondly remember the Mustangs’ last win in the series. Wesley Porter’s pick-six beat the Trojans 8-0 in 2016.

Lake Norman has a much loftier ranking by MaxPreps and the Wonders are coming off a disastrous road outing at Hickory Ridge.

Still, this looks winnable for the home team, especially if they’re mad about what happened last week.

Lake Norman’s three victories have come against unusual foes for a 4A school — West Iredell, Mitchell and Mount Pleasant. Lake Norman is 0-1 against 4As, although the 4A the Wildcats encountered was Davie, which has trampled everyone and everything in its path so far. Lake Norman lost that one 42-28.

Lake Norman is a running team,and maybe the Wonders can take that away.

The last meeting was in 2008. Lake Norman opened in 2002. The schools have only played three times with the Wonders taking all three.

Believe it or not, East Forsyth is ranked higher than Davie by MaxPreps, although not much higher.

East Forsyth is ranked 11th in the state, while Davie is 13th.

Davie is averaging 55 points per game, and that’s not a typo.

Davie won’t score 55 Friday night, as East Forsyth will try to control the game with its running attack and keep Davie’s offensive firepower off the field.

East Forsyth has thumped Davie in each of the last four seasons, including a 31-14 win back in the spring, so this is the acid test for the War Eagles.

Are they just an offensive show or serious contenders for a playoff run? This game will tell us a lot.