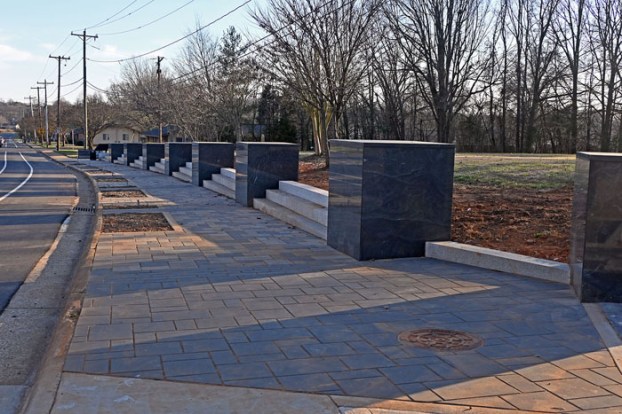 Natalie Anderson/Salisbury Post File Photo — The Dixonville-Lincoln Memorial Task Force is moving ahead on a project for the cemetery at 210 Old Concord Road.

SALISBURY — With the second phase nearly complete, Dixonville-Lincoln Memorial Task Force Chair Emily Perry says recent efforts have focused on engravings that will honor more than 500 African-Americans buried at the cemetery and connected to the historic neighborhood.

Since 2010, the task force has worked to identify the names and connections of hundreds of African-Americans buried at the cemetery for a three-phased project. The Dixonville community was located on the east side of Salisbury, and much of it was negatively affected by urban renewal in the 1960s.

The memorial site, located at 210 Old Concord Road, represents a centerpiece of a tight-knit neighborhood and a pathway for children attending the historic Lincoln Elementary School, which was the first school opened for African-American students in Salisbury in the late 1800s.

Work on the cemetery project started in 2018. Task force and community members have worked to make repairs to the existing grave markers and create a history sign, a foot path and an interpretative walk. Additionally, a $50,000 grant from the Z. Smith Reynolds Foundation allowed Rowan-Cabarrus Community College to install a “Here’s My Story” seating area that includes a bench with quotes from local resident and Salisbury Pride board member Jamie Wilkerson and Kiddieland Kindergarten teacher and administrator Timika Peterson.

Perry told the Post task force members have gathered and confirmed about 530 names they’re aiming to engrave on the columns constructed along the perimeter of the cemetery. Among the prominent African-American residents of Salisbury who are buried at the cemetery are Bishop John Jamison Moore, who founded the AME Zion Church in western North Carolina, and the Rev. Harry Cowan, a minister who was born into slavery but went on to establish 49 churches and baptize 8,500 people. The earliest known burial honors Mary Valentine’s death in 1851.

Additionally, Perry said task force members have obtained quotes from family members of those who were connected to the neighborhood and community in some way, both alive and deceased. Some quotes speak to the cemetery, while others describe life at that time in general, Perry said. The goal is to engrave those quotes on the steps of the memorial site.

The task force isn’t certain how much the engravings will cost, Perry said, but it’s the last piece of the second phase of the project, which focuses on the interpretative walk. While the task force had a goal of completing the engravings by the end of the year, Perry said the pandemic and delays in the supply chain may make that goal unachievable.

Additionally, the task force is determining how best to share the completed project with the entire community as Perry is hesitant at this time of coming together as a group for a full dedication service. The city, she added, is working to include on the project’s website some quotes and background information about the individuals and their contributions to the community. The website is www.dixonvillememorial.com.

The third phase of the project involves revitalization of Lincoln Elementary School, credited as the focal point of the community. The revitalization plan is to transform the long-vacant historic school into a useful space as well as reconstruct the footbridge used by children to get to the school.

But Perry said that phase is a challenge because it’s owned by Mt. Calvary Holy Church, which is hoping to sell the property. The task force doesn’t have the funds to purchase the property, but it still holds “a lot of sentimental value to those of us who grew up in that neighborhood,” Perry said.

“We’re not giving up,” she said, adding that the task force is exploring other options to preserve the school.

To date, donations to a Go Fund Me created for the project amount to nearly $510,000 out of the $555,000 goal. The GoFundMe can be found at gofundme.com/f/dixonvillelincoln-memorial. In August 2020, city council members adopted a budget ordinance to allocate $200,000 from the 2020-21 budget’s fund balance for the second phase.

The seating area at the cemetery is designated in memory of Fred M. Evans, a former Dixonville resident and Memorial Task Force chair who’s credited with beginning the memorial project. Others originally involved with the project who have since passed include the late William C. Peoples, Betty Dan Spencer, Floyd A. Kerr III and Eleanor Qadirah.

“Those people put their heart and soul into this project,” Perry said. “And I’ll be forever grateful for them.”

SALISBURY — A jury began deliberating Wednesday afternoon in the Fishzilla murder case, but a verdict wasn’t reached on the... read more