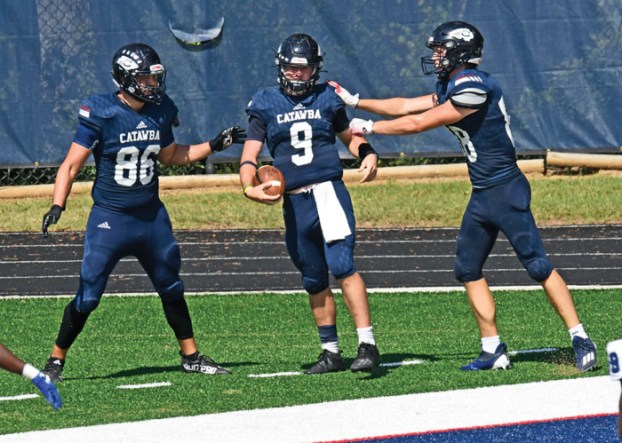 — Curtis Walker, Catawba football coach after a 17-10 victory over Barton

“The Empire is a beast of a project but one that has the potential and capacity to transform our downtown and the Rowan County experience for decades.”

— Whitney Wallace Williams, chair of the Empire Hotel Redevelopment Task Force after selection of a Charlotte developer to redesign the hotel property

“All those that are married have a first date and you’re always wondering if you’ll get that second date. In this case, the first date went really well and they came back to us.”

— Greg Edds, chairman of the Rowan County Board of Commissioners on a new development being called the I-85 Commerce Center

“As soon as New Sarum says ‘Cheerwine,’ I’m there.”

— Lee Roberts, Faith resident who was near the front of the line to snag the brewery’s soda-inspired lager

“I really thought he was going to take my life.”

— Andrea Dillard, testifying during trial about James Christopher Davis, who was shot and killed by Dedric Michelle Mason

“Our goal is to find sustainable funding.”

“If you remember nothing I say, just remember this: be a part of this. It’s happening here and it’s not happening in enough places.”

— Shawn Duncan, who encouraged those at a farm-to-table dinner in China Grove  to join Main Street Marketplace’s efforts

“When she brought it back down here, we were movie theater popcorn people so we weren’t sure how it was going to work. After the first couple attempts of her getting (the recipe) down pat, it became addictive.”

— Coleman Wilson, of The Old 97 Kettlecorn Company on his sister Taylor introducing the family to the treat she discovered in college in Pennsylvania

“We felt that if everyone else in the state could be open and they could have 70,000 people at the Panthers stadium, then we should be able to have a fair safely.”

— Johnny Love, manager of the fair

In an era where people are more divided than ever on politics, there’s some agreement on a common economic development... read more