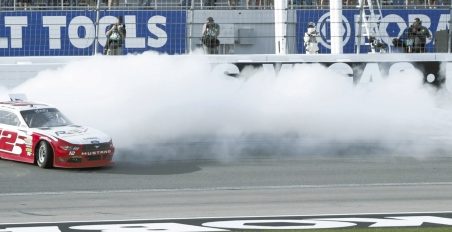 It was the opener of the seven-race Xfinity Series playoffs and Allgaier, who started the race ranked third, could have used the win to strengthen his championship chances. Instead, the victory went to his JR Motorsports teammate.

The victory didn’t carry the same weight for Berry, who is running a partial schedule this year for JRM. But he earned his first career victory earlier this year at Martinsville to spark a funding push that has earned Berry a promotion to full-time next year.

At Las Vegas, he earned his second career Xfinity Series victory while filling in for injured teammate Michael Annett.

Allgaier finished second and was followed by Noah Gragson for a 1-2-3 podium sweep by the Chevrolets owned by Dale Earnhardt Jr. and his sister. Allgaier led a race-high 90 of the
Austin Cindric, the reigning Xfinity Series champion, finished fourth in a Ford for Team Penske.

Daniel Hemric, who was announced earlier Saturday as next year’s Xfinity driver for Kaulig Racing, was fifth in a Toyota.

College football roundup: ‘The curse is broken’ as Wolfpack stuns No. 9 Clemson