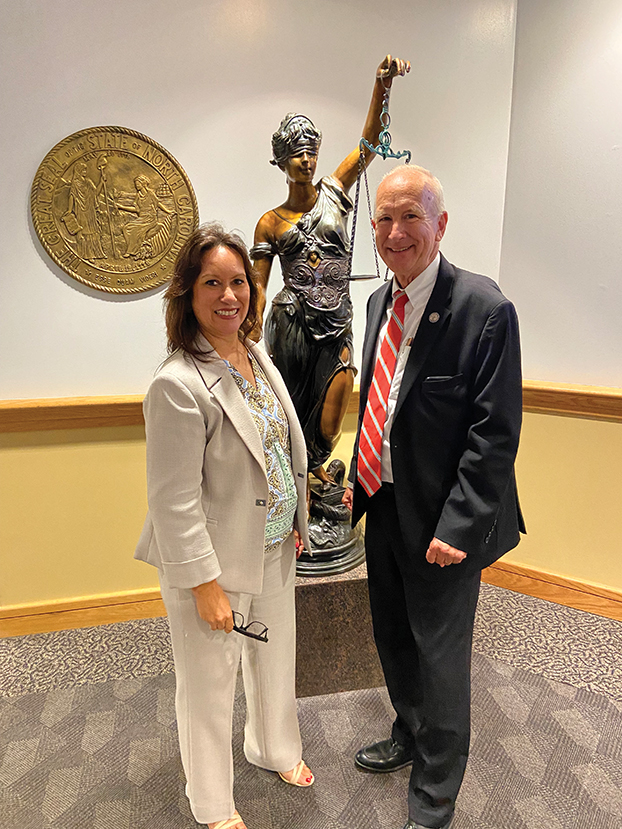 SALISBURY — Nalini Joseph has spent most of her professional career advocating for children in the state’s courts.

Joseph, a Salisbury resident, has served as district administrator overseeing Iredell and Alexander counties for the North Carolina Guardian ad Litem program for the past nine years. She held a similar position in Mecklenburg County for the five years prior.

In those roles, Joseph has been responsible for managing several attorneys and dozens of volunteers who serve abused and neglected children by supporting their best interests in court.

Joseph’s passion for protecting children made her a natural fit for the recently-launched statewide task force on ACEs-informed courts. Formed by North Carolina Chief Justice Paul Newby, the task force seeks to help judges, bailiffs and other members of the justice system understand how Adverse Childhood Experiences; Adverse Community Environments (shortened to ACEs) impacts children and how the justice system should adapt as a result.

Adverse childhood experiences could be anything from witnessing violence to experiencing parental neglect. A child can receive an ACEs “score” based on a simple 10-question quiz that includes questions such as “Did a parent or other adult in the household often or very often push, grab, slap, or throw something at you, or ever hit you so hard that you had marks or were injured?”

“It all boils down to the fact that we’re spending inordinate amounts of money on a reactive response, instead of a proactive response,” Joseph said. “If we can somehow get these children to address their experiences during their childhood, if we can get them on a path to recovery before they become adults, we have lower incidence of heart disease, diabetes, cholesterol problems and we see less surgeries taking place because of all of these diagnoses which are imbedded in childhood experiences.”

A child who has a high ACEs score is also more likely to interact with the court system, which can be difficult.

“Think about how stressful it is for an adult to testify in court,” Joseph said. “Now think about a 10-year-old child who is in court through no fault of his or her own, who has to testify against a parent or a caregiver that they have known for years. It’s a hostile and adversarial setting, and the ACEs team is working to make our courts as non-adversarial as possible for our victims.”

“I have never been in a room with so many smart, energized people,” Joseph said. “It was amazing to feel the energy in the room because everybody was excited.”

While Joseph admitted the task force’s strategy is still being ironed out, its intentions are clear.

Joseph is one of about two dozen members on the task force and is the only representative from Rowan County. Joseph has been assigned to the educational subcommittee, which will meet over the coming months to discuss ways to improve knowledge of ACEs among members of the justice system.

Joseph said she wants to implement strategies such as giving judges “bench cards” that contain the proper language they should use when dealing with cases involving children who might have a high ACEs score. Joseph said she’d also like to explore expanding practices she is familiar with from her work in the Iredell County Courthouse, such as having a therapy dog for any child that needs or wants to have a pet at their side when they have to testify.

Joseph said she plans on working with local judges, bailiffs and other justice system stakeholders to understand how ACEs are causing long term impacts in the counties she’s most familiar with.

“What I’d like to do is form a mini-subcommittee here in the counties that I work and live in to roll this out,” Joseph said. “We would put our heads together and say ‘Hey, why are we where we are with our crime statistics? Why do we have so much more violent crime than in some of our neighboring counties? What does ACEs have to do with it?’”

Joseph expects the task force to strategize and execute its plan over the next two years.

More information about the ACEs task force can be found online at www.nccourts.gov/ACEs.

By Carl Blankenship carl.blankenship@salisburypost.com SALISBURY — The Rowan-Salisbury Schools Board of Education will receive an update on the results of... read more