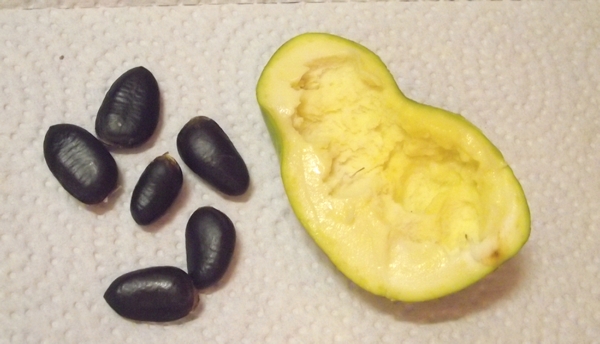 Salisbury Post File Photo — A ripe pawpaw and its seeds. The fruit has a creamy texture.

If you take a hike on the forest trails in North Carolina and much of the eastern US, you may come across the pawpaw tree, which bears the largest fruit that is native to North America.

The fruit ripens in late summer and has a distinct taste, like a cross between a mango and banana with the texture of custard. I tasted some at the annual Forsyth County Pawpaw Festival a couple weeks ago. While I was there, I learned a lot about this seemingly exotic yet native fruit.

Thomas Jefferson loved the fruit so much he planted it in his arboretum at Monticello, where trees can still be found growing today. Lewis and Clark saved themselves by feasting on pawpaw fruit on the way home from their expedition. The fruit was even eaten by many Americans during the Great Depression when it got the nickname “poor man’s banana.” Other nicknames include “West Virginia Banana,” “Hoosier Banana” and “Wild Banana.” Despite its popularity, many people today have never tasted the fruit. Most of the people I asked at the festival never have and were excited at the chance.

The fruit has a poor shelf life. At best, a grower may have up to a week to sell it before its quality diminishes; however, it is best eaten within 2-3 days of harvesting. Pawpaws cannot be cultivated to sell in grocery stores where longer shelf life is important. The skin and seeds of pawpaw fruit will give you an upset stomach if you eat them. The pawpaw has no major insect, disease, or plant problems that complicate growing it commercially.

Many homeowners find pawpaws fun, easy and rewarding. They are well adapted to growing in the understory of forests and prefer shady areas. Growers will find that young trees are often harmed by too much sunlight, especially as a young plant. Keeping young plants shaded is important and the soil should be well drained and slightly acidic, around 5.5 – 5.7 in pH.

Many nurseries in the area grow pawpaw saplings that you can purchase. You can also start pawpaw trees from seeds. Plant at least two varieties since a single pawpaw tree is not self-fertile.

They do best when planted in early spring or fall. The new trees will need plenty of water. The tree blooms in the spring and smells foul to attract flies and beetles instead of bees. Trees started from seed will bear fruit in 5-8 years, while transplanted trees may bear fruit as early as 4-5 years.

Since the fruit has a short shelf life, gardeners often use the fruit or eat it shortly after it is harvested in the late summer. Only the pulp is edible so be sure to discard the skin and seeds. At the pawpaw festival, people talked about pawpaw ice cream, bread and smoothies in years past. Pawpaws can be substituted in recipes that call for bananas. One person even told me about a craft brewing company that infuses beer with pawpaws.

Cody Craddock is an extension agent with the N.C. Cooperative Extension.

As a 14-year-old Rowan County 4-H’er. I have been involved for three years and serve as president of the 4-H... read more