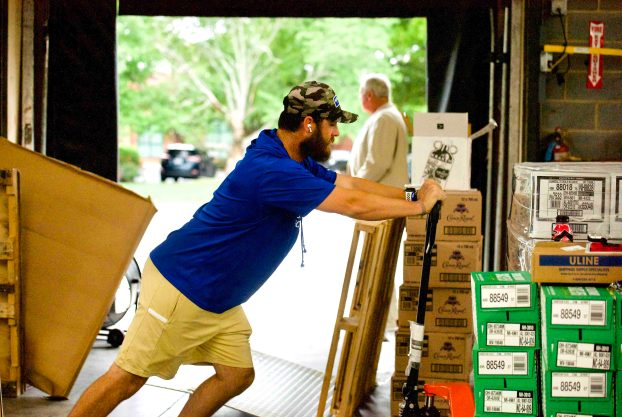 SALISBURY — Rowan-Kannapolis Alcoholic Beverage Control staff arrived for work around 6 a.m. Monday expecting a shipment of bottles from the state warehouse, but the truck carrying the liquor never arrived.

The 6:30 a.m. delivery time passed and the local authority learned the truck wouldn’t arrive until Wednesday, which was problematic. Deliveries to stores and restaurants were delayed and the ABC overhauled employee schedules to fit delivery into a compressed time frame. The ABC board is also regularly shorted bottles.

The missed delivery is emblematic of supply chain and delivery issues local ABC boards have been facing in recent months. The former chair of the N.C. ABC Commission Zander Guy resigned on Sept. 17, effective immediately in the face of the issues with state warehouse deliveries and supply.

Rowan-Kannapolis ABC General Manager Terry Osborne said the issues and uncertainty are putting extra pressure on staff. Before delivery problems began, he could go to bed knowing what the schedule would be like the next day. Occasionally there would be a problem, but now he wonders what he will face in the morning.

“You wonder from week to week,” Osborne said.

Osborne said the local ABC is among those in the past that have, with the blessing of state officials, gone directly to distillers to supplement supply. That has helped with supply issues, but those cases come on pallets. Unpacking and breaking down pallets is extra work for the warehouse, which normally receives unpacked cases from the state supply.

While Osborne acknowledged sales have stayed up, he said the board does not intend to gloat about the increases. Osborne said he is a firm believer in control over liquor sales. The system raises revenue for the county, municipalities and the state, but sales also contribute to youth programs and addiction prevention.

Rowan-Kannapolis ABC Board Chair Marny Hendrick said even with some constraints on the ability to get certain brands and products, people often buy similar alternatives rather than leave stores empty handed.

Patrick Hampton, assistant warehouse manager and manager of mixed beverage sales, was unpacking pallets at the warehouse on Friday. Hampton said there are no normal schedules right now.

“We’ve just kind of got to go where we’re needed right now,”

Hampton said the increased volume is adding pressure as well.

“It’s unbelievable,” Hampton said. “If you’re not here to see it first hand, you can’t imagine the amount of business that has picked up.”

Hampton said the increase is not just bottle sales. Bars and restaurants are selling through more product as well.

“We are definitely busy and there is always something to be done,” Hampton said.